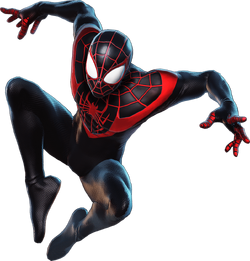 Black
Unusual Features
Small hairs on his hands and feet, allowing him to stick to any surface.
Status
Citizenship

Miles Aaron Gonzalo Morales was born to Rio Morales and Jefferson Davis in Brooklyn, New York. Since his childhood, Miles have always had a passion for superheroes such as Captain America and the X-Men. However, Miles sees his father as a hero the most because he had been a dedicated police officer before he was even born. Living in one of the dangerous neighborhoods in Brooklyn, Jefferson would put his life on the line to making a difference all over Brooklyn and Miles would brag about him to his friends, mainly Ganke Lee and Riri Williams.

As he grew up, Miles continued to show his love to his father but at the same time, Miles began to spend time with his uncle Aaron Davis who was a talented artist but also was a convicted felon where he had committed crimes such as armed robberies. Because of this, this brought worry within Jefferson and Rio, forbidding Miles in seeing Aaron despite him always keeping Miles on the right path. This made Miles a bit rebellious and he ends up sneaking out of the house just so he can try to spend time with Aaron and express his feelings through his art.

As Miles reached his high school years, he was already excelling in his academics and his talent in art reached its potential. The school he went to before was Brooklyn Academic High School where he was met with drug dealers, gang members, and teen parents. He has seen students do drugs, fight, and even have sex in public during his freshman and sophomore years and it brought fear within Rio for she doesn't want Miles to become one of those students. After leaving Brooklyn Academic, Miles was registered in the lottery for the Brooklyn Visions High School of the Arts, a prestigious school where Miles can expand his artistic talent and he was awarded the final spot, at the same time, Jefferson had informed that there was a break-in at the Oscorp Laboratories after Norman Osborne's arrest.

Miles would go and visit Aaron (against his father's wishes) to tell him that he had gotten accepted to Brooklyn Visions. Aaron decided to take him out for dinner and later his art warehouse where he had been doing all of his art since his jail release. As Miles continued to bond with Aaron, Oscorp's radioactive spider emerges from his uncle's bag and bites Miles' by the hand. Miles soon discovers superhuman abilities from the venom fused with the OZ serum such as wall-crawling, adhesion, and Spider-Sense and newer abilities such as camouflage, and bio-electrokinesis. When he discovered this, Miles was left shocked by what had happened to him. He revealed his powers to Ganke and Riri, concluding that he had similar powers to Spider-Man which Miles also looks up to after his fame skyrocketed following the Goblin's defeat. However, Miles reacted negatively, stating that he should leave the actual heroism to Spider-Man.

However, when Miles was confronted by Jefferson about his time-spending with Aaron stating that he was a criminal that will never change, Miles angrily argues with him, telling him that Aaron was still family despite his troubles and tells Jefferson to get his head out of his ass and try to give Aaron a chance. This ended up Jefferson slapping Miles before realizing what he had done. Hurt and angered, Miles storms out of the house ignoring his mother's calls for him to wait. As Miles continued to walk through the streets of Brooklyn during the night, he was encountered by a group of thugs that were running from the police. But instead of stopping them, he let them flee, ignoring the officers' chastising. After being out for so long, Miles decided to head back home to apologize to Jefferson, but before he even made a move, he got a call from Aaron, telling him that he should report to the hospital, for his father had been shot.

When Miles arrived, Aaron, his mother along with Ganke and Riri were present. When he asked what had happened, Rio told him that Jefferson along with the others was out looking for him and a group of thugs came up out of nowhere and gunned down Jefferson. When the doctors arrived, Miles asked them about Jefferson's condition and they gave him the news no person wants to hear -- Jefferson had died from his wounds and his killers were still at large. This left Miles completely heartbroken for he was going to apologize to him only to find out that he was out looking for him that led to his death. Depression began to take over Miles and he began to withdraw himself from everyone, blaming himself for getting Jefferson killed.

Days after Jefferson was laid to rest at his funeral, Rio went to talk to Miles. He told her that it was his fault that Jefferson had gotten murdered and he should've stopped the thugs after leaving the house. Rio responded by saying that it wasn't his fault and that Jefferson never meant to react the way he did before and he wanted to apologize for how he acted towards him and that he still loved him and Aaron, regardless of his shady background. This left Miles feeling more guilty, but soon he becomes determined to find his' father's killers and bring them to justice.

The Birth of the Onyx Spider

As his junior year began, Miles continued to keep an eye on the killers as he listened to the news about the updates of their whereabouts. Along the way, Riri and Ganke help train him in using his powers followed by Riri creating him a pair of web-shooters after taking inspiration from Spider-Man and designed a red and black suit resembling the web-slinger. Miles was given the "Spider-Man" title, but he rejected the name due to confusion with the original hero. He was later given the name Onyx Spider by Ganke and Miles immediately accepted it.

Miles listened to the police scanners closely to where his fathers' killers were and he sprung into action, finding them at their hideout. He confronts them over Jefferson's murder which they heartlessly taunted him on how he looked at them before killing him with the last bullet. Miles wasted no time throwing the first punch at the leader before fighting the rest of the gang. After disarming all of their weapons, he made his way to the leader and was going to throw the last blow at him, but decided not to bring him and the rest of the thugs to the police, leaving them a note saying "From your good friend, the Onyx Spider".

After his father's killers were brought to justice, Miles began to start a career in vigilantism, like Spider-Man, apprehending criminals which brought praise from most people, as well as the Brooklyn police but it did bring ire to some people. His appearance as the Onyx Spider brought Rio's attention and she gained a lot of respect for the web-slinger for bringing justice for her fallen husband. This also brought interest for Aaron as he watched the Onyx Spider on the news being interviewed by the reporters as he continued to protect all of Brooklyn.

As Miles reached senior year, he continued on with his career as the Onyx Spider, his notoriety slowly began to reach its peak and most of his classmates began a fanbase dedicated to the web-slinger.

Onyx Spider vs the Kingpin

Meeting Spider-Man and the Avengers

Retrieved from "https://marvelcomicsfanon.fandom.com/wiki/Miles_Morales_(Earth-7090)?oldid=260508"
Community content is available under CC-BY-SA unless otherwise noted.