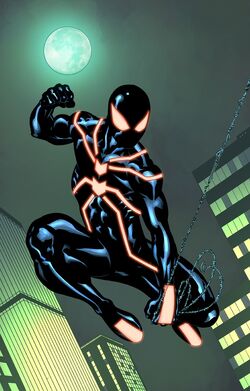 Peter was right... Doing this bears one big hella responsibility... And personally, I love it even more now, so I can't blame him...

Before the years of Ultron Revolution, Miles Morales seemed to have the same history with his Earth-61615 counterpart, living as a normal adolescent in Brooklyn and frequently hanging out with his Uncle Aaron in his apartment, right until Ultron started an all-out war against humanity and those who dares to oppose him and his ideologies in achieving what he perceived as world peace: extinction of all existing life and restarting it on his own image. After his non-stop gathering for information about humanity's existence, Ultron gained more and more power and superiority against the defenders of humanity, to the point where no one seems to actually prevent him and his movement, which surprisingly lasted for more than 10 years, a decade full of suffering and deaths among the burdened living.

The result of the revolution has caused so many destruction and casualties, from the deaths of innocent lives of civilians, both human and mutant, inhuman, or any other varieties or race and the many demises of super-powered individuals, both heroes and villains who sacrificed their lives trying to reclaim humanity's freedom from his monstrous clutches. Lucky for Miles and his family during the first year of Ultron's assault across New York, they were taken into safety by superheroes alongside the million other survivors into a secret underground mega-city the size of New York City (also located below and inside New York), developed by the Stark family and was upgraded by Iron Man in case of so-called" apocalyptic emergencies.

Unlucky for Miles, however, he learned that his former roommate and best friend Ganke Lee along with some of his other friends and acquainted schoolmates didn't make it, causing him to break down in tears for days as his parents comforted him in his loss. Thankfully, Miles was given a glimmer of hope when his Uncle Aaron helped him cheer up and move on by looking at the brighter side of things in the midst of a dark age. Aside from his parents, Miles would often hang out in his place within the underground city, and thanks to Aaron's knowledge on how to secretly leave without the guards' awareness, the two got the chance to see the light of day and explore the ruins of New York City every weekend, albeit with utmost caution to survive the threat of Ultron's patrolling forces, for the next five years.

While following his Uncle Aaron, Miles tragically witnessed his loved one's demise, who after having revealed himself as the thief-turned-vigilante Prowler, after a confrontation with the Sinister Six. Grieving the lost of his Uncle Aaron during the Fifth Year, he often spent his nights inside the room that was once Aaron's quarters, wherein incidentally Miles was suddenly bitten by the Oz-enhanced spider, which emerged from the ceiling, and Miles discovered he received superhuman abilities like camouflage, increased agility, and the unique electric blast. Miles wouldn't know the truth on how the spider got in the first place, though he later found out that his Uncle intentionally brought the spider to prevent its maker Norman Osborn and the Sinister Six from having on what Osborn deemed to be the ultimate deadly weapon that would either help fight Ultron's forces outside, or help themselves in ruling the new underground civilization. When Osborn chose the latter, the conscientious Aaron had a change of heart and stole the spider so the villains wouldn't get their hands on the mutated spider, keeping it hidden until his unfortunate death.

In one of the days that he tried demonstrating his powers outside the underground city for the first time, Miles caught the attention of Spider-Man, who was patrolling on the top of a building in search for any possible survivors. Unbeknownst to Miles, however, he never expected encountering a group of nomadic civilians quietly living inside the ruins of a demolished building. Finding them there, Miles also found himself in a tough predicament after a gang of Ultron Sentries discovered the civilians' hiding place, leaving him no other choice but to use his bio-electric powers to stun the Sentries and save the group of people he encountered and lead them straight to the safer underground city.

In doing so, an impressed Spider-Man, who arrived at the scene to assist Miles and the civilians, had made his best decision to make the young Miles as his mentee, protege as another yet newer web-slinging enhanced individual (secretly planning Miles to be his eventual successor), after seeing the teenager's potential in his newfound powers, much to Miles' overwhelming gratitude for the following years to come. As a result, Miles often skipped classes at his school (without dropping out) in the underground city that his parents had enrolled him so he could finish his studies, in exchange of constantly improving his under the training and guidance of Spider-Man, Black Cat, and Deadpool, the former Merc with the Mouth turned S.H.I.E.L.D. agent, who simply went to tag along his alleged "best friend," much to Peter's chagrin that he had to work with his frequent frenemy. As his gifted abilities kept on improving, Miles was given the chance to craft his own makeshift costume as Parker gave an extra of both his synthetic web fluid and his old yet perfectly-functioning web-shooters to use when battling the forces of Ultron in New York as a second web-slinger, proudly calling himself the Arachnid, though some of his fellow trainees would tease him by adding Kid in his ops moniker, which often annoys Miles but was surprisingly a great sport handling it a few times.

On the very day the long-time war against Ultron ends, Arachnid and the rest of his subdivision team were sent to distract the Sanctuary's Citadel Ultron Sentries as the other lead in their final mission neutralizing the defensive units of Ultron's Sanctuary. During the final days, Peter was heavily traumatized during the devastating skirmish that occurred across the battlefield, forcing him to momentarily retire from hero work while he continuously recovers. After the modest sacrifice of those who were willing to gave up their lives so that the others can successfully finish the mission, Miles, was one of the others who made it towards the very end, returning home to his parents with a warm, welcoming embrace on the notion that their son is safe and well.

Months have passed since Ultron met his fateful destruction, Peter finally went to retire with his wife Felicia Hardy, officially giving the mantle of the Spider-Man moniker Miles, becoming the friendly-neighborhood of New York in his early 20s. As Spider-Man, Miles was mostly praised by his neighborhood, as even Peter Parker's adolescent children, Ben and Ashley came to be inspired and astonished by the heroic actions of their father's granted successor as the new Spider-Man, idolizing Miles and often meeting after a day of crime-fighting to simply hang out, train & spur under his original techniques, and ask stories from both his and their father's days as the tandem duo Spider-Men during Ultron Revolution.

During society's recovery from the Great Technological Depression, Miles and his parents voted for General Thunderbolt Ross as they voted for him to be the country's president during the election over Wilson Fisk, though he personally mostly done that in order for his idol, Edward Stark (Tony Stark's diabolical son), to win as Vice President as Stark was Ross' running mate. However, when Stark introduced his "peaceful" New World Order in the form of H.A.M.M.E.R.'s Empire, which proved to be S.H.I.E.L.D.'s darker inevitable replacement, Miles was disillusioned and was filled with dread when H.A.M.M.E.R. practically made its move to rule not just, the United States, but the most of the nations of the world due to his powerful influence and connections with other accomplices, which included organized crime.

The all-new Spider-Man joined the Resistance in their many battles against the Empire, redeeming his regret on idolizing the deceitful Edward Stark whom he initially thought would actually bring difference on the world for the best. In the final battle, the Resistance were victorious, ending another terror caused by one of Earth's greatest minds, and with the it, peace and liberty was restored throughout the rest of the entire world which H.A.M.M.E.R. for almost five years, thanks to the contributed help and assistance of these heroes including Spider-Man and his allies who all fought valiantly to restore peace and freedom across the States, and with Stark's Empire surely failing, setting the rest of the world free from his totalitarian one world government. In the aftermath of Stark's fall and the Resistance's victory, Miles continued to freely patrol as Spider-Man, still dedicating his life to protect and inspire people in the midst of recovery in New York.

The multiversal events known as the incursions caused realities to crash with each other, with the central point being each universe's planet Earth, and one of those universes have pitted Earth-61616 against another distant future reality that unexpectedly unleashes an army of duplicated speedsters, led none other than the future Speed Demon. During the cosmic assault, Elektra and the Defenders helped evacuate millions of people launch several massive spaceships (built and previously owned by the deceased artificial intelligence Ultron) containing millions and millions of people as they try an evacuate the planet. In the end, the two realities collided, and Miles and his allies, having left on the planet, unfortunately died together with his universe. Miles felt stoic, knowing that he did his best to save as many people as he and his fellow heroes could.

After the restoration of the Multiverse at the hands of the benevolent Beyonder in order to compensate the disastrous and convoluted Secret Wars, Miles along with the rest of Earth-61616's surviving residents would later resurface in his own native universe, which was eventually brought back to existence together with the rest of the Multiverse, most notably after the heroes of the mainstream reality were able to banish Nightmare from this reality, preventing him from taking over Earth-61616 and making it his realm of darkness. Back into reality, Miles continued as the Spider-Man, which upon returning home, he didn't expect to have his plate full of dealing with criminal activities across New York ever since Stark's dictatorship and H.A.M.M.E.R.'s authority fell, making him resort to joining forces with both his fellow vigilantes, the Future Foundation and the newly-restored X-Men, and the New York Police Department, whose one of its division is now led by officer Peter Parker, his mentor and predecessor. In his personal life as Miles, things have gone just as well, having met new friends and acquaintance in the form of his college life, most notably his newfound confidante Fabio Medina, a mutant, and one of his classmates' best friend who was a talented artist by the name of Lana Baumgartner, whom Miles was enamored with despite being aware that her mother is the local super-powered thief known as Bombshell.

Seemingly those to Miles Morales of Earth-61615, only far more efficient with the use of his powers.

Seemingly those to Miles Morales of Earth-61615, only more experienced than his younger self.

Seemingly those to Miles Morales of Earth-61615.

Retrieved from "https://marvelcomicsfanon.fandom.com/wiki/Miles_Morales_(Earth-61616)?oldid=266701"
Community content is available under CC-BY-SA unless otherwise noted.