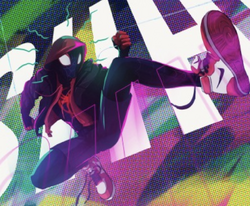 Miles Morales has always wanted to do good, but felt overshadowed by his police officer father, Jefferson Davis. This led him to focus more on his other passions, like music and graffiti art. He became close with his Uncle Aaron, who encouraged his passions and always gave him an outlet.

Miles was unaware that his Uncle Aaron was secretly the master thief the Prowler, who was hired to steal genetically altered spiders from Oscorp. He was confronted by Spider-Man while making his escape, and only managed to get away with one. After he got away to his apartment, he discovered Miles was there waiting for him, as he had just gotten in an argument with his father. The spider got out of its containment and found its way to Miles, who it bit.

Over the next few days, Miles went through the same mutation as Peter Parker did when he became Spider-Man. Miles began testing the limits of his powers, and became inspired by Spider-Man. He started going out to fight crime while wearing a makeshift costume, only to discover his father has become dedicated to bringing the new vigilante.

However, before he could decide to give it up, he was approached by Kate Bishop and Riri Williams. They extended the offer for him to join their team of "Young Avengers". Initially hesitant, Miles accepted out of hopes he could show his father he really was a hero.

Retrieved from "https://marvelcomicsfanon.fandom.com/wiki/Miles_Morales_(Earth-101)?oldid=250220"
Community content is available under CC-BY-SA unless otherwise noted.