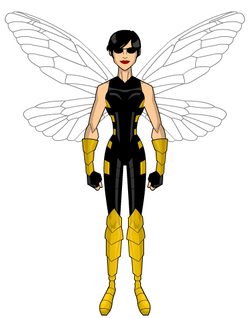 Michelle Pym was born after Hank Pym and Wasp rekindled their relationship. She is the second oldest Avenger after the Captain. Life was strange growing up, with both of her parents being genius scientists, and with a part-time fashion designer mom. She, too, was a media darling, since both parents were reserve Avengers. She initially didn't like this, but grew to fit with it. This also made her a very stuck-up person.

One day, right in the middle of class, she shrunk down and began flying around the room uncontrollably. Not only did she get suspended, but she was almost swatted to death by her teacher. Her dad mind-wiped her superiors, then told her he expected this to happen, and that she needed to begin training with her dad. She fought her mom and dad regularly, and when she defeated them both, her dad said that she was ready to join the superheroes.

One day, she was confronted by the Captain, and the other 3 founding Avengers. She was asked to join their ranks, but she refused. Her dad was disappointed in her for this. But when the news reel ran of the Avengers being captured in space, she realized the mistake she made. She became the last of the new team, and was able to defeat a few Skrulls single-handedly. During the battle, her winning streak was cut when she lost a wing. This removed her from the battle. However, the entire wing grew back within a week. She rejoined the Avengers, and has made everyone she knows proud by trying to shake the cameras off her tail.

Size Reduction: Michelle has the ability to diminish her size, which itself grants her several other abilities:

Retrieved from "https://marvelcomicsfanon.fandom.com/wiki/Michelle_Pym_(Earth-1175)?oldid=255481"
Community content is available under CC-BY-SA unless otherwise noted.