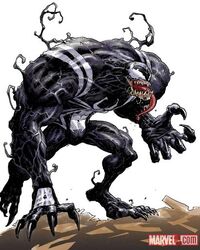 During his research into what would ultimately become the super-soldier serum, Dr. Abraham Erskine outlined a special Brazilian revolutionary diet and isometric exercise regime that he theorized would create a super-soldier. However, because the diet and regime required a lifetime of adherence in order to produce the desired results, this research was rejected by the US government, and when Erskine was assassinated, it was passed down through his family, finally ending up in the hands of his grandson, Brian Van Patrick. When his sons Michael and Ian were born, Van Patrick decided to test out the diet and the exercise regime on his boys to see if his grandfather's theories were right. As it happened, the theories were right, and within twenty years, Michael and Ian Van Patrick became the greatest student athletes in the country, earning scholarships to the University of Kentucky. However, when reporters discovered that Ian and Michael were the great-grandsons of the man who created Captain America, they came under heavy scrutiny. Though the testing all showed that their abilities were due to training, Michael and Ian lost their scholarships, and nearly lost every award they'd ever received.

Brian had discovered that people over at Camp Hammond were interested in his boys becoming heroes. Ian was more interested in going than Michael, but he was convinced. So they both pressured their dad into allowing them to go to Camp Hammond. He gave them his approval and they were off.

At Camp Hammond, he and Ian broke the course record for non-speedsters, impressing most of the other trainees and SHIELD members. They were immediately put on Team Red. After lasting though more training, Michael, Ian, and a girl named Felicity were dubbed the Scarlet Spiders.

It was on Team Red where Michael began a romantic relationship with Felicity. Ian also found love and her name was Abigail Boylen. An incident occurred during a training exercise, where Armory's Tactigon went out of control. Team Red was sent in to contain the situation. Michael saw a beam from the Tactigon heading towards Abigail and he tried to protect her.

He was to late, by the time he had Abigail, she was already dead. Ian came over and pushed him out of the way. Ian blamed himself for Abigail's death and fell into a deep depression.

Two nights afterwards, Michael couldn't sleep because of the reoccurring nightmare of Abby's death. So he got out of bed and walked over to where she had died. It was here that he saw his brother's suicide note. Michael was worried and searched the camp for Ian. Then he saw a beam from the Tactigon shoot right past him. Michael ran to the armory and saw his brother fleeing. Michael tackled Ian and punched him in the face. Ian explained the situation and said how sorry he was. Suddenly the armory exploded and someone that looked liked the brothers emerged wearing the Tactigon.

The man fired a beam from the Tactigon at Michael and Ian. Michael pushed his brother and did a back flip to avoid the beam. Then he began to run towards the man. He narrowly missed being hit by another beam. Before he could get up, the man slammed the Tactigon onto Michael's head. Ian tore a pole out from the ground and threw it at the man. The pole impaled his chest, but he just stood there. Then the pole seemed to be absorbed into his body and his wound had healed.

Their fight had attracted the attention of other trainees and faculty. The man with the Tactigon turned his attention to the crowd and fired at them. Felicity was tending to Michael, when she saw her mentor being killed by the man. She tried to run after him, but Michael grabbed her ankle. She wouldn't be able to stop him, they needed a plan first. Felicity helped Michael to his feet and they regrouped with Ian.

The Scarlet Spiders were on their way to fight the man destroying Camp Hammond. They had formed a strategy to distract him, while the two others attacked. Michael sprayed webbing onto the man's face and slammed him into the ground. Michael ripped a piece of concrete out of the ground and used it as a shield. While the man fired upon Michael, Ian and Felicity snuck up behind him and they began their assault. Ian tied up the Tactigon with webbing and Felicity attacked him at close range. The man was randomly firing the beam to try and hit them. To stop him, Felicity webbed his arm up too and held it back. Michael joined his team and did the same thing. They pulled together in an attempt to tear the Tactigon from his arm. When they did this the man fired a beam at the same time and it went through his head.

His body fell to the ground motionless. His death was an accident, as Team Red planned to only immobilize him. The entire camp was destroyed and everyone was dead. One aircraft survived the destruction and the Scarlet Spiders took it to find help. In the course of a few months, Felicity had left the team, becoming the Black Cat and the cosmic being known as Proteus had taken the Earth as his own.[2]

The Scarlet Spiders' mission objective, given to them by the Avengers' leader Quasar, was to ensure that Proteus' allies were removed from the equation. This also included his own elite team, his Heralds. Over time the team, seemed to be succeeding in their task, but Proteus kept replenishing his troops with little effort. While Proteus was away dealing with the Avengers, the Scarlet Spiders set out on their own to capture two of Proteus' main bases. In order to achieve this quickly, the team foolishly split up, with the latter being captured. Michael didn't know of his brother's fate, so he continued blindly into battle. He walked into a trap and was nearly beaten to death by two of the weaker Heralds of Proteus. The base was guarding an extraterrestrial life form that Proteus captured in its infancy to use to his advantage in the coming battles. One of the Heralds grabbed Michael by the throat and tossed him at the containment cell. He crashed through it and was engulfed by the symbiotic alien within. It bonded to him and they became Venom.

With his newfound abilities, Michael used the Venom symbiote to his advantage and easily defeated the two Heralds. Michael liked the way the symbiote made him feel and the power it brought to him. He entered the path on the way to his eventual downfall under the control of the Venom symbiote.

After learning that his brother had fallen in battle, Michael convinced Quasar to commence the destruction of Proteus' reign. Without the consent of the new Avengers' leader, Crimson Shadow, Quasar, along with Venom, took a select few of teammates to put a stop to the tyrant Proteus.

Venom is able to press lift up to 80 tons, this is not his true limit as his strength increases with his size and variable muscle mass.

The Venom symbiote, like all others of its kind, is extremely vulnerable to heat and sonic based attacks. They can cause the symbiote physical pain and discomfort, where as "more powerful" attacks might be completely ineffective.

Transportation: Web-slinging
Weapons: The objects formed from the symbiote

Lost scholarship due to the fact his great-grandfather was the man who created the Super-Soldier Serum and the fact that MVP's powers might have been derived from said serum.

The original MVP[3] was created by Dan Slott, Stefano Caselli.

Retrieved from "https://marvelcomicsfanon.fandom.com/wiki/Michael_Van_Patrick_(Earth-826)?oldid=184746"
Community content is available under CC-BY-SA unless otherwise noted.