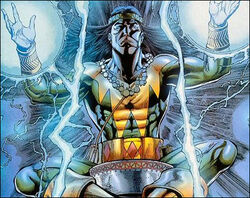 Michael was not interested in learning his grandfather's arts, instead choosing to become a surgeon. When his wife Katheryn became sick, he vowed that he would find a cure for her. However, she soon died. His daughter Elizabeth became angry at him, and was taken in by the MacNeils. Michael spent his time in the wild as a recluse. He was visited by his grandfather's spirit and learned the magical arts.

He also encountered a goddess and helped her deliver her child, Snowbird. James and Heather McNeil met Michael and Snowbird and invited them to join Alpha Flight. Shaman didn't join the team officially, but was a loyal ally. He took the name of Shaman, using both his mystic and medical talents.

Sarcee Sorcery: Shaman was a powerful magician trained in the use of the Sarcee people's nature-based magics. His mystical pouch contained a number of items for use in spells.

He was a skilled surgeon, one of the best in Canada. He was fluent in a number of languages, including Inuit.

Shaman refused to affect the minds of others against their will. He couldn't force a spirit to help him unless he is using the talisman.

Transportation: None known.
Weapons: The Great Key, a long golden staff (usually kept in his mystical pouch). It served as a gateway to the Realm of Beasts when it was used at the Eye of the World.

Retrieved from "https://marvelcomicsfanon.fandom.com/wiki/Michael_Twoyoungmen_(Earth-1010)?oldid=114956"
Community content is available under CC-BY-SA unless otherwise noted.