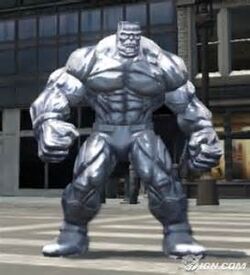 Little is known about Ironclad's life before the Secret Invasion. It can be assumed to be similar to his mainstream counterpart. The rest of the U-Foes were captured and replaced by Skrulls, stupidly leaving behind Ironclad. He was invited to join the Ultimate Alliance by fellow Hulk villain, the Rhino.

An influx of cosmic radiation can cause a temporary loss of control to his density, causing Ironclad to increase in density until he sinks into the ground.

Retrieved from "https://marvelcomicsfanon.fandom.com/wiki/Michael_Steel_(Earth-6109.2)?oldid=123327"
Community content is available under CC-BY-SA unless otherwise noted.