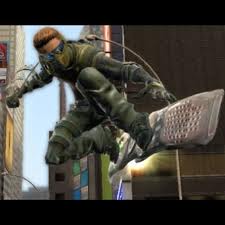 Run! Run! Has fast has you can your evil can't escape Green Goblin, man.

Michael Rogers Osborn or (Subject 1974) was created from Project Rebirth II. Project Rebirth II: Was a cloning project created by Norman Osborn (Green Goblin ) & Miles Warren (The Jackal). Green Goblin / Norman Osborn While still on Goblin Serum OZ: (untested OZ Human Performance Enhancers which enhanced physical abilities and intellect but drives the user to insanity, invented by Professor Mendel Stromm a.k.a. Wardell Stromm ), wanted a son he could be proud of so he takes DNA from Harold "Harry" Osborn (pre-New Goblin) "in his eyes" failed son and has Miles combine it with a stolen DNA sample of Steve Rogers (Captain America) in 1990 the second sample of his blood, the first used by Red Skull to made himself a clone body of Rogers.

After Norman dies has the Green Goblin , Miles learns that Subject 1974 will suffer the same fate has his other clones (Unstable DNA) and also that the Super-Soldier Formula (the serum was not a drug per se, which would have metabolized out of his system, but in fact a virus that effect biochemical and genetic change in the body.) has long- term side effects on the body because it altered biochemistry, like Steve Rogers, the clone body would began to deteriorate starting with the bones.

When Harry Osborn became New Goblin using Goblin serum OZ. Miles steals some, using the only sample he has on Subject 1974 of Project Rebirth II. This stables the clone, fixes side effect of the Goblin Serum OZ ( Which caused insanity in users). Also not only does this fix the problem it seems that Subject 1974 could now made his own serum a mix of both Goblin serum Oz and Super-Soldier Formula in his cells, later called (SSFOZ), which was not fatal to only him and that his bones would become harder and stronger.

One unforeseen side-effect Subject 1974 couldn't be cloned nor powers transferred. This drove Miles Warren (The Jackal) more insane who wanted to create a line of Supersoldiers and the clone would also need to age five years to stabilize fully. When Miles the Jackal was killed in one of his attack against Spider-Man and the Scarlet Spider (the Clone Saga). Subject 1974 of the Project Rebirth II, at age 5 was put in stasis pod by Oscrop computer in 2005 in a secret lab. Do to a leak in the pod cooling system he was exposed to Vita Radiation the key to fixes long-term side effect of the Super-Soldier Formula .

Subject 1974 was found at age 5 in a stasis pod in old Oscorp Industries building in a secret underground lab by a young Dr. Ilya Faro (of Stark/Fujikawa industries, Inc.) in 2074, (In the alternate future set in the year 2099, Stark Fujikawa is a major corporate power, The only known staff members were Hikaru-Sama and Shudo. Later the company is taken back by lost in time heir Andros Stark and CEO Michael Rogers Osborn).

Subject 1974 was raised has her adopted son and name Michael after her own dead son who was killed in a fire, name on the stasis pod said Osborn subject 1974 Project Rebirth II. She learns that Project Rebirth was the name of the project that created the legendary Captain America in the early 20 century. So the name Michael Rogers Osborn was born.

Dr.Ilya Faro at first got him different teachers in martial arts after he discovered he had incredible strength, agility at 7, he started learning Ninjitsu , Aikido, western boxing, Taekwondo and learned other strikes: Karate, Muay Thai, Choi Kwang Do, and gymnastics which like his DNA father Captain America into his own unique fighting style which, he became a master of multiple martial arts. Also, at age 10 he learn how to use every weapon know to man (swordsmanship, stick fighting etc.) He was also home school until 15 because of his abilities.

A young superGenius, he enters Massachusetts Institute of Technology (MIT) at the age of 15 to study electrical engineering, computer science and quantum mechanics . Michael is awarded enrollment into Stark/Fujikawa Industries inc. internship Gifted program at 18. He becomes a full time employee at Stark/Fujikawa Industries inc. in the tech department, at this time Stark International was called Stark/Fujikawa after Tony Stark was cheated out of Stark International by the machinations of the mysterious European entrepreneur Obadiah Stane, who took over Stark's company, renaming it Stane International in 21 century. Later to lose it to Kenjiro Fujikawa, the man who had taken over Stark's company during Tony Stark's stay in the Heroes Reborn universe. (In this timeline 2099, Andros Stark was never born. Timeline changed after Timestorm 2009–2099 Andros now exist in timeline.)

He was less than pleased at the corporation's vast control over the city and corruption . One day he finds himself in poor part of the city were he sees corrupt Public Eye cops and megacorporation thugs bully a helpless family, without a second thought wearing only a long coat and future style wrap around tinted glasses he jumps into action taking out 20 men. The men were force to run but now the world and evil megacorporations would know a new non-corporation-uncontrolled super-soldier was out there, he had to be careful.

At this time The new Spiderman started battling Alchemax and other villains. This was also when Michael adopted mother DR. Ilya Faro tell him about his past, that he is a clone of both the legendary Captain America & the supervillain/Later hero New Green Goblin. At first he is anger but also glad, it explain why he could do what he could and why his mother made him hide some of his skills, he hugs his mother and thanks her taking Rogers for his middle name but also keeping the Osborn name to redeemed for that part of his family evil past Osborn/Green Goblin curse .

He started to working on the inside to change Stark/Fujikawa Industries inc. as well has outside, When a Goblin started to attack that new Spiderman, Michael was anger knowing that his family name Osborn might be ruined again.

He would have to become a superhero to hide his identity, once again his mother surprise him with the Green Goblin II gear (tech base on New Goblin) she had been the one to find both him and the gear in a secret underground lab at an abandoned Oscorp Industries, the secret lab of Norman Osborn which she hid from her bosses. Upgrading tech was easy for Michael but the armor?

Once again his mother came up with the way, "why don't you make the suit base out of (Unstable Molecule Fabric) or "UMF?" (Originally invented by Reed Richards of the Fantastic Four) , He mix it with something called Memory Plastics it worked he was even able to upgrade his [face mask] with an artificial intelligence called POTTS ironically name after Pepper Potts and Cyberpathy Link base on Tony Stark's Extremis (Iron Man 2099 tech called Extremis 16.5. Note: Michael doesn't have Extremis in him because of his DNA.)

Two weeks later a new hero, Green Goblin 2099 a.k.a "The Green Man" was born, Michael sore he would use his powers to fight for ordinary people against those in power who abuse their influence and authority, ending the evil Osborn/Green Goblin curse forever by redemption. He went to work on fighting the evil megacorporations both on the inside has well has outside.

He fought Goblin (Earth-928.2) clearing the Osborn name for good, he fought Demogoblin and other villains, proving at least there was a good Goblin. A year later, he meets and some time teams up with Spider-Man 2099 against Super megacrop villans. He meets time lost Peter Parker and as a running with a time-traveling female Hobgoblin of the year 2211 (Robin Borne) from the alternate universe of Earth-9500. He studies her time tech now has limited time travel.

When Spider-Man 2099 disappeared, Green Goblin 2099 travel through time to find him. He meets Peter Parker and Miles Morales in an another dimension, during his time-traveling adventure he fought other version of Hobgoblin 2211 and many versions of Norman Osborn in the past and as well many some of the past enemies of the first Spider man in 2012. While looking for his version of Spider Man 2099, he is asked by Nick Fury, director of S.H.I.E.L.D to join. He does as a part timer.

After he finds Spider-man 2099 of his world, he heads back to the year 2099. Only to find Doom became President of the United States "by right of conquest", Doom extended an invitation to Spider-Man(Miguel) to join his Cabinet as Minister of Supernormal Affairs. Additionally, Doom hired 2099’s Ghost Rider as his Federal Marshall to keep order in Transverse City. Director Jake Gallows; The Punisher ask/blackmails Green Goblin 2099 into joining SHIELD 2099. The Punisher, Jake Gallows, as head of this new police, who put his brutal law in place. SHIELD was quickly named the Punishment Police.

When the Punisher became crazy over his former ally Matt Axel's rebellion, he was seen as a menace by Doom, who informed his agent in SHIELD to kick him out of the organization and kill him.

Jillian Wong, Gallows' assistant was knocked out to prevent her from helping him. She was rescued by him and facilitated his evacuation from Earth to space.

Doom continued to make changes, putting cyberspace-connected Dive Booths in every city. Then he created a national corporation called Cynex, and arrested the heads of the previous corporations, downgraded the credit levels of all citizens from the unlimited Black Cards to Gold Cards, and forced the corporation CEOs to choose one among them to be killed. They unanimously chose Avatarr, and when Doom attempted to kill him offhandedly, Avatarr revealed himself as a powerful alien with hallucinogens for blood. Doom eventually killed him, but not before he was affected by the hallucinogens, and recorded a public broadcast where he threatened the American populace for allowing Avatarr to pass unknown among them.