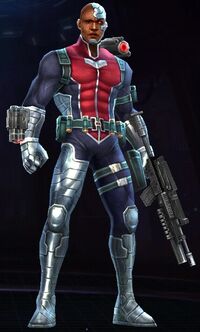 Mike Peterson was badly injured during Galactus' invasion of Earth, Ace used cybernetic technology to save Mike's life and him into Deathlok. Horrified at becoming a cyborg, he rushed out of the Project Centipede facility despite his father's pleads. Finding himself on the streets of Detroit, he accidentally absorbed a Punisher Robot. Gaining access to Galactus' computers, he learned of the attack on Taa II. Making his way to the battlefield, he joined with other superheroes in searching for the Ultimate Nullifier, a weapon capable of destroying Galactus. They confronted Galactus with the Nullifier and demanded he spare Earth. He ignored their demands, believing they couldn't us the weapon, but Deathlok was able to interface with it and destroyed Taa II. Faced with the prospect of dying by Peterson's activation of the Nullifier, Galactus withdrew. The heroes decided to stay together as Squadron Supreme.