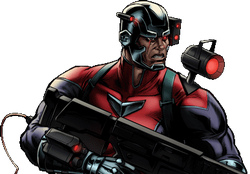 Black
Unusual Features
Burn scars on the right side of his body, right leg missing replaced by cybernetic prosthesis, a cybernetic ocular implant, Centipede on the left arm
Status
Citizenship

You said if we worked hard, if we did right, we'd have a place. You said it was enough to be a man but there's better then man! There's gods... and the rest of us? What are we? They're giants... we're what they step on.

Born on 28 August 1979, Mike Peterson was a factory worker who after suffering an injury decided to join Project Centipede with hopes of changing his life. After one of the laboratories of Project Centipede suffered an explosion caused by an unstable subject, Mike went to the aid of his suppliers, and rescued the life of a doctor. He was publicly seen, and mainly caught the attention of Rising Tide member Skye.

The now labeled "Hooded Hero" Mike tried keep a low profile, but was eventually found by Skye in a café, who warned him about S.H.I.E.L.D. and recommended that he go public as a superhero before the government could cover up his actions, but Mike declined. Before he left, Skye told him where to find her.

He tried to convince Project Centipede to go public along with him, as it would help to show that "the product" worked, but was denied. Mike returned to his workplace, but his employer refused to re-employ him. Angered, Mike brutally attacked his employer, stating he was a hero and his boss a villain, and fled.

At a hospital, Peterson visited the doctor he because he didn't know what to do. The doctor condemned Mike's actions, because he exposed the program and put at risk the identity of the people who gave her the technology for it, and told him that Michael Peterson had to disappear. Mike agreed with the doctor, saying he was no longer Mike Peterson but someone else, and that what the doctor said to be a disaster was his "origin story."

He went to Skye's van, who at the time was working with S.H.I.E.L.D. as an asset, and forced her to take him away with his son, Ace, after knocking down the agent who was escorting her. Near a train station, Mike ordered Skye to delete all the information that could be about him to facilitate the beginning of a new life. Secretly, Skye managed to tell S.H.I.E.L.D. where to find them.

When S.H.I.E.L.D. agent Coulson appeared, Mike quickly tried to escape. At the same time the doctor from Project Centipede sent an assassin disguised as a policeman to kill him. After a confrontation with Agent Grant Ward, Coulson managed to convince Mike to surrender. Mike was ultimately shot by Ward with the Night-Night Gun, discharging a sedative into him, and taken into S.H.I.E.L.D. custody.

Mike Peterson was later recruited into S.H.I.E.L.D. Although the organization's doctors were unable to remove the Centipede device from his arm, the shot from the Night-Night gun had stabilized the Extremis in his system. Mike was briefly put on Coulson's team after a Edison Po, a former marine with connections to Centipede, was broken out of prison. After a fight with Centipede agents in an abandoned warehouse in Oakland, Centipede learned that Mike was working with S.H.I.E.L.D. and abducted his son. Although Mike told the rest of the team that Centipede wanted him in exchange for Ace, they really wanted Coulson. Mike betrayed the team and gave him over to Raina. At the last moment, he handed Ace over to Skye and turned back to save Coulson, but was apparently killed in an explosion.

Although he was believed dead, Mike later woke up in a hospital bed with severe burns, one leg missing, and a Centipede device strapped to his wrist. Centipede, through a potentially explosive ocular implant they placed in his head, welcomed Mike Peterson back.

Mike Peterson was transported to Italy in a hyperbaric chamber, where he was outfitted with a Cybertek prosthetic leg as the new subject of Project: Deathlok. After killing the Cybertek employees and mercenaries who were said to have failed "the Clairvoyant" by letting Coulson's team find Mike, he was informed that he was not to engage the incoming S.H.I.E.L.D. agents. Following orders, Mike withdrew from the fight. As of that mission, he is still not allowed to see his son, Ace, to let him know he is okay.

Tracking down Peterson quickly became one of S.H.I.E.L.D.'s top priorities, as they realized finding him would lead them to the Clairvoyant. Agents John Garrett and Antoine Triplett were given the task of finding him and his mater. After tracking him to Australia, Deathlok attacked the two agents in a S.H.I.E.L.D. safehouse, tipping them off that they were closing in on the Clairvoyant's location. Deathlok was then sent to Macon, Georgia, to protect Thomas Nash, a catatonic individual S.H.I.E.L.D. suspected might be the Clairvoyant's true identity. However, Nash was just a scapegoat, someone the Clairvoyant tricked S.H.I.E.L.D. into thinking was the real Clairvoyant to get him off their trail. Peterson encountered Melinda May and Felix Blake in Macon, and incapacitated Blake with ease. S.H.I.E.L.D. then tracked Peterson to a location in Pensacola, where Nash was also set up to fool their agents. Nash was confined to a wheelchair and unable to speak, so the Clairvoyant "spoke" for Nash through a computer, which he used to make him "confess" to being the real Clairvoyant. Although Ward killed Nash in cold blood, Deathlok was able to get away.

Deathlok remained in hiding until after the Hydra sleeper cell embedded within S.H.I.E.L.D. made itself known and John Garrett was revealed as a double agent and the true identity of the Clairvoyant. Now working for Hydra, Garrett tasked Deathlok with shadowing Agent Ward, another Hydra double agent whose identity had not yet been compromised. Ward, meanwhile, was ordered to retrieve Skye so she could decrypt a hard drive containing S.H.I.E.L.D.'s secrets, and he took her to a diner in Los Angeles (the same diner where she first met Mike) to isolate her from Coulson and his team and to work on decrypting the hard drive. However, Skye had already figured out that Ward was secretly a Hydra agent, and alerted the LAPD to their location. When Skye tried to get away while Ward was busy fighting the police, Deathlok jumped onto the hood of her car and grabbed her through the windshield.

Deathlok took Skye and Ward back to the Bus, where Ward attempts to coerce Skye into decrypting the hard drive. When he failed, Deathlok received a message from Garrett ordering him to hurry up the operation. Skye attempts to reason with Deathlok, but he believed his situation to be hopeless with Hydra threatening to kill him or harm his son if he disobeys. He then used one of the weapons in his armor to give Ward heart attack, and gave Skye an ultimatum: decrypt the hard drive, or Ward dies. She relented, and Deathlok stopped Ward's heart attack. Later, when Coulson snuck aboard the plane to rescue Skye, Deathlok tried to prevent their escape, but failed when Coulson flew out the plane's cargo ramp with his flying car Lola. Though Ward wanted to pursue his former teammates, Deathlok tells him that Garrett thinks they don't matter and have recalled them to base. Ward warned Deathlok against pulling another stunt against him again, to which the cyborg defends that he was only following orders.

Deathlok later killed a Columbian drug lord for Quinn's plan to sell a thousand Deathlok soldiers to the US military. For a job well done, Garrett streamed footage of Peterson's son, who was being held hostage again by Cybertek; to his implant. He remained by Garrett's side as Coulson's team came for them. But when Skye managed to free Ace and hijack Mike's implant feed, he rebelled against Garrett, and almost killed him. Though finally free, Mike refrained from seeing his son, not wanting him to see the monster he had become, and instead left to try and redeem himself.

Peterson later joined Coulson's reconstituted S.H.I.E.L.D. and was tasked to monitor Hydra operative Doctor List, who was interested in other superhumans. After Coulson was ousted from his position as director by Robert Gonzales and forced to go on the run, Peterson was pulled off his assignment to help Coulson and Lance Hunter steal a Quinjet to search for Skye, who had been taken in by the Inhumans. Coulson then decided to go to Grant Ward to find Skye.

Alongside Coulson and Hunter, Peterson rescued Fitz in San Francisco with their Quinjet. They then went to Tijuana to recruit Ward and Agent 33 to infiltrate HYDRA and locate Skye. Using Bakshi, who had been brainwashed by Agent 33, Peterson was able to pose as Bakshi's bodyguard to attend a meeting between Bakshi and Dr. List.

While the Centipede provided Mike with great power, it unfortunately contained the major downside of Extremis, being highly unstable and would eventually result in transforming its host into a walking explosive. However, after being hit by the Night-Night Gun, he no longer is in danger of exploding.

Injuries sustained in the botched prisoner exchange caused the loss of his right leg and eye. His eye has been replaced by an ocular implant believe to contain an explosive charge similar to other implants of the same type. This threat of death is used to force Mike's compliance in committing acts that he would otherwise never do. However, with the Centipede project seemingly defeated, Deathlok has no current orders and is free to enact his own will.

Retrieved from "https://marvelcomicsfanon.fandom.com/wiki/Michael_Peterson_(Earth-1010)?oldid=122871"
Community content is available under CC-BY-SA unless otherwise noted.