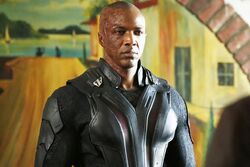 They're up there living in their ivory towers, claiming to be selfless and righteous, only to leave us to clean up their messes. They consider themselves giants... we're just what they step on.

Mike Peterson was a single father working construction jobs to pay his rent and support his son, Ace. However, after suffering an accident while on the job, he enlisted in the mysterious Project: Centipede, which was secretly a front for Hydra.

Centipede embedded a special apparatus into Peterson's arm that contained a concentrated version of the Extremis formula. Mike was the first successful test subject, but refused to comply with what Centipede was asking him to do. He ran away, and inadvertently drew attention to himself by saving people from a burning building.

While this did help Hydra get back on his tail, it also attracted the attention of S.H.I.E.L.D., particular Phil Coulson and his right hand, Quake. They offered him protection, and he even began to thrive while going through S.H.I.E.L.D. training.

However, things got complicated when Hydra kidnapped his son. Coulson and Quake held strong that they wouldn't negotiate with terrorists, but Mike knew what he had to do. He turned himself over to Hydra to save his son, and they instantly began experimenting on him.

He was equipped with a cybernetic arm and leg, as well as various internal weapons system. But worst of all was a monitoring device streaming directly from his eyelid, that allowed his handler's to keep a constant watch on him. If he were to step out of line, Hydra would blow his head off.

Ever since, he has been acting as Deathlok, one of Hydra's fiercest assassins. While still trying to remain hopeful that one day he will be able to redeem himself, he has grown disillusioned with the concept of heroes, believing right and wrong to merely be labels people used on each other for their own benefit.

Retrieved from "https://marvelcomicsfanon.fandom.com/wiki/Michael_Peterson_(Earth-101)?oldid=250219"
Community content is available under CC-BY-SA unless otherwise noted.