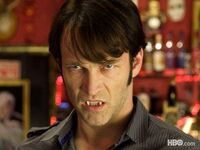 I cannot Let Darkness fall, no one more can suffer as i do

Michale suffer from a rare blood diseases, he was searching a cure by experimenting on bats, but something go wrong and caused Morbius to turn into a Vampire-Like Being, causing him to feed on blood. After a few years, he was asked by Dr. Strange to help him against Dracula and Lilith, at first he refused but then he turn in the leader of The Midnight Sons!

Pseudo-Vampirism: Morbius has been transformed into a being similar to a vampire and, as a result, possesses a number of superhuman abilities similar to those possessed by true vampires. However, Morbius isn't a true vampire as the source of his transformation is scientific, not mystical.

Superhuman Speed: Morbius can run and move at speeds that are beyond the natural physical limits of the finest human athlete.

Superhuman Stamina: Morbius' enhanced musculature produces less fatigue toxins during physical activity than the musculature of a normal human. He can physically exert himself at peak capacity for several hours before the build up of fatigue toxins in his blood begins to impair him.

Superhuman Acute Senses: Morbius' senses of sight and smell are enhanced to levels well beyond that of normal humans. Morbius is able to detect objects with perfect clarity at much greater distances than a normal human. He retains this clarity, even in near-total darkness. He is also able to see into the infra-red end of the electromagnetic spectrum, allowing him to see individuals at night by their body heat. His sense of smell is similarly enhanced, able to detect the scent of blood in the air from miles away.

Regenerative Healing Factor: Also, like true vampires, Morbius possesses an accelerated healing factor that enables him to rapidly regenerate damaged bodily tissues much faster and more extensively than a normal human. Injuries such as gunshots, slashes, and severe burns, within hours or minutes, depending upon their severity. Though highly developed, Morbius' healing powers aren't sufficient to regenerate missing limbs or organs.

Fangs & Claws: Like supernatural vampires, Morbius possesses elongated canines that he uses to pierce the flesh of other beings for the purpose of consuming their blood. Morbius can also, however, use his fangs as weapons in very close combat situations. He also possesses a single retractable claw at the tip of each fingers. The claws are very sharp, capable of rending human flesh and bone with ease.

Psionic Gliding: Through mental concentration, Morbius is able to glide through the air over short distances. However, Morbius can only glide at speeds of about 35 miles an hour. While he can run faster than that, Morbius can use this ability while flying over rooftops.

Mesmerism: Like true vampires, Morbius can hypnotize others if they look directly into his eyes long enough. While under his control, Morbius typically has full control over an individual. If an individual has sufficient willpower, they can resist or overcome this power.

Vampire Creation: Like true vampires, Morbius is able to transform individuals into pseudo-vampires like himself by draining them of all their blood. Morbius has control over the pseudo-vampires he creates, just as supernatural vampires have mental control over the vampires they create. The ones Morbius creates possess superhuman strength but they don't have accelerated healing powers. Upon receiving lethal injuries, their bodies turn to dust.

Immunity To Most Vampire Vulnerabilities: As Morbius isn't a supernatural vampire, he is immune to all of the special mystical vulnerabilities that they have. He is unaffected if confronted with religious icons and will not incinerate if exposed to direct sunlight. Morbius does tend to rest during the hours of the day but most supernatural vampires fall into a dormant, death-like state during the day. Though he does rest, he doesn't have to line his sleeping area with soil from the land of his birth whereas supernatural vampires must do so otherwise they're unable to travel more than 100 miles. Morbius has no special vulnerability to objects of weapons composed of silver. While he can be injured by weapons made of silver, he'll heal normally as he would from other injuries whereas injuries inflicted by silver on supernatural vampires take much longer for them to heal from, if they're not killed outright. Morbius also won't be killed by having a wooden stake driven through his heart.

Morbius is extremely intelligent, having won the Nobel Prize for biochemistry. While he has had no formal training, Morbius' powers make him a formidable combatant against most individuals.

The one true weakness Morbius has that supernatural vampires possess is that he must regularly ingest fresh blood in order to maintain his physical and mental vitality. He must generally feed several times a week, though he can go for long periods without feeding if he pushes himself. However, the longer he goes, the weaker he becomes and the more likely he is to lose control. While he can't be killed by sunlight, his eyes and skin are sensitive to exposure to sunlight.

Retrieved from "https://marvelcomicsfanon.fandom.com/wiki/Michael_Morbius_(Earth_-_23681)?oldid=37788"
Community content is available under CC-BY-SA unless otherwise noted.