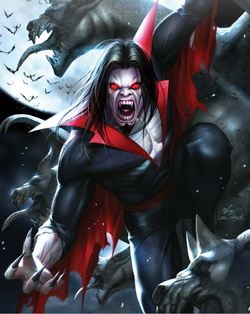 I will not tolerate any more suffering from anyone! Those who do wrong shall have their blood be shed!

Wolfrick Mikhail Mironescu was born in Cluj-Napoca, Transylvania, Romania to unknown parents who eventually passed away when he was a young child. He was later adopted by a couple under the name Morbius who were well-known multi-billionaires and would move into their home located in Providence, Rhode Island, USA. Throughout his life, Wolfrick, or he refers to himself as Michael (due to his middle name being Slavic language) was diagnosed with a rare blood disease and he would constantly get sick which brought worry within Mr. and Mrs. Morbius, and they would take him to hospitals where many doctors try to discover what kind of blood disease Morbius has, but no results came up. Years later, he was enrolled in the University of Rhode Island where he majored in Biochemistry and Diseases where he had blossomed as a Noble Prize winner despite his blood disease, presenting himself as Dr. Michael Morbius as a start on his career.

After he was given the family fortune following his adoptive parents' deaths, Morbius began to develop a cure for his blood disease involving Neogenics, but a vampire bat invades his laboratory and interrupts his procedure, making contact. It bites him in the hand, which as a result, cured him of his disease but it also transformed him into a human/vampire hybrid with powers of superhuman strength/speed, superhuman stamina, healing factor, superhuman hearing, flight, and immortality. The mutation also caused Morbius to crave blood, making him lose control and attack the people of Rhode Island, ripping their necks to suck their blood before retaining control, horrified of what he had done. For the next years, he isolated from the outside world as he tried to develop an antidote to reverse the effects. But as he finally reaches to complete the antidote to eliminate the vampirism, he was attacked by the HYDRA, led by Red Skull, destroying the antidote and abducting him before his servants were able to come to aid.

After his abduction, Morbius was put under a brainwashing procedure where his memory was completely erased and he was turned into an emotionless and demonic killing machine who craves nothing but blood. He was treated like an animal who served Red Skull and Doctor Octopus who joined him along with the other superpowered villains. With no control of his mind and body, Morbius killed people and fed on their blood. Many people saw him and feared for their lives as he continued with heading blood on the innocent. When the Avengers formed years later, Morbius along with the members of HYDRA battled against them including their then-recently joined member Spider-Man. When he went head-to-head with the webslinger, Morbius brutally beats him to a pulp and was going devour him for his blood but he stopped when he started to see what was happening and he backed away, showing that his memory was coming back and fear began to take in toll. He was attacked by Iron Man, making him retreat before Spider-Man was taken away by the rest of the Avengers.

Seeing Morbius starting to regain his memory, he was subdued by the troops and was transformed into a ruthless bat-like creature. When the Avengers faced him again eventually, he showed no mercy towards the heroes. Completely under Red Skull's control, Morbius overpowered every single Avenger especially Spider-Man (who recently gotten an upgrade for his Spider-suit). The Avengers decided to not hold back anymore and fully attack Morbius but Spider-Man began to notice that Morbius was still fighting the mind control Red Skull has put on him. When the webslinger attacked the Red Skull, Morbius tries to retaliate but his memories began to return and Red Skull attempts to keep him under his control. Spider-Man attacks Morbius, knocking him unconscious and the HYDRA was forced to retreat. The Avengers successfully haul Morbius away to the Avengers Tower in New York City.

The Avengers and Return to Rhode Island

After he was brought into the Avengers Tower, Morbius was held in the lab when he began to struggle to break free and Spider-Man began to develop an antidote to cure him out of the form HYDRA had put him in. Once he did break free, the rest of the Avengers fought him to keep him restrained from attacking them. Spider-Man was able to finish the antidote and cured Morbius, transforming him back into his original vampire form and freeing him from the waning mind control, allowing him to regain his memories. When Morbius asked what had happened, he was told by Spider-Man that he was under HYDRA's control and were relieved to get him out before he killed anyone. When he heard the last two words, Morbius began to remember the days he became a vampire and how he had killed many people because of his powers and it made him hate himself for what he had caused. Despite being told that it wasn't his fault, Morbius still felt he was accountable for the lives of the people he had taken when he was under the control.

He left the Avengers and returned to Rhode Island where people began to notice him and they quickly evade him, fearing that he would go after their blood and kill them. Due to Spider-Man's antidote, it prevented Morbius from caving blood as he used to when he has gotten his powers. He tried to keep his appearance on a low profile, but more people recognized him and some of them tried to attack him. This brought Morbius into isolation as he returned back to his home where he was met with his servants who were relieved that he had returned years of trying to find him after his kidnapping. But he avoided them and locked himself away, destroying everything in his room as his self-hatred fueled within his heart. His laboratory completely destroyed by the HYDRA, making it impossible to restore and the antidote he made to turn back human, forever gone.

The detest of what he had done and how people feared him because of his appearance made Morbius suicidal at one point, but due to his immortality, meaning that he can't kill himself no matter how much he tried, it made him more disgusted at himself. However, he was unexpectedly approached by former Avenger Doctor Strange who was visiting Providence and sensed his life energy from afar. Morbius at first rejected Strange's approach, but the sorcerer didn't back down and eventually got him to talk. Throughout Strange's visit, he was able to talk him out of attempting suicide (since he can't due to his immortality) and spend time with him until he starts to make peace with himself and accepts his vampiric form, no matter how much he hated it. After thanking Strange, Morbius began to rebuild his home and continued on with his work as a biochemist and even help the Avengers in some missions after being given the Avengers Communicator.

In his recent years, Morbius is still coming to terms with his vampiric form. When he showed his colleagues his form, it took them a while for them to reel in on what happened to him and they managed to accept his appearance and was able to regain the recognition he deserves while continuing to fight other superpowered villains with the Avengers and he even was invited to the wedding of Captain America and Falcon. Along the way, he met former X-Man Nightcrawler and the two began to start forming a friendship. Due to their experience of ostracism from other people, they became closer. Eventually, Morbius gained feelings for Nightcrawler and the two began their romantic relationship.

Retrieved from "https://marvelcomicsfanon.fandom.com/wiki/Michael_Morbius_(Earth-7090)?oldid=265797"
Community content is available under CC-BY-SA unless otherwise noted.