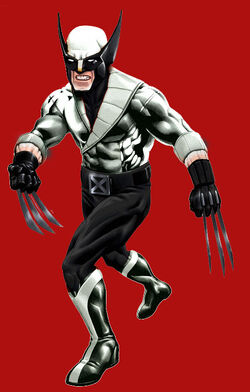 Emma Frost and Wolverine had always respected each other. They were capable leaders, great X-Men, and terrific teammates. But one night, after Emma disguised Scott as Wolverine, she realized she was genuinely attracted to him. 9 months later, Michael Frost was born.

Because his parents got together for a fling, and since Wolverine was growing attracted to Psylocke, and they had a child (Howl), Michael was raised by Emma. His father was kept a secret from him, and from the X-Men altogether. Although, most were able to guess his true parentage when he became very angry after not getting what he wanted. After his mutant powers of telepathy emerged, the secret was still safe. But when he read his mother's mind, he discovered the truth, and diamond claws sprung from his hands. He then asked to begin training, and designed a costume after both his parents. He soon defeated his parents in battle, and most of the X-Men, so he was allowed to join the team. He was the first of his generation to enter the field.

In the field, White Wolf proved to be a very deadly adversary. He soon became a close friend to all of the X-Men, and never used his powers off the field. He was pleased as slowly, all of the other children joined the X-Men, including his half-brother Howl. This team was deadly in combat, and were close-knit teammates. But when Howl left the team, so did White Wolf's respect for him. But he continued to lead the X-Men, and do it well. After the Skrulls came to Earth, he gave away the position of leader to see what being a follower was like.

Healing Factor: White Wolf inherited his father's famous healing factor, allowing him to survive most anything.

Superhuman Senses: White Wolf has greater senses than the average human by 100x.

Claws: White Wolf has 3 bone claws in each arm that can cut through most substances, including steel.

Diamond Skeleton: A combination of his parents' powers, Michael's skeleton is covered in organic diamonds, enforcing their durability, and allowing his claws to cut through even adamantium.

Telepathy: The last of his superhuman abilities, Michael can read and manipulate minds, even altering memories.

Retrieved from "https://marvelcomicsfanon.fandom.com/wiki/Michael_Frost_(Earth-1175)?oldid=255480"
Community content is available under CC-BY-SA unless otherwise noted.