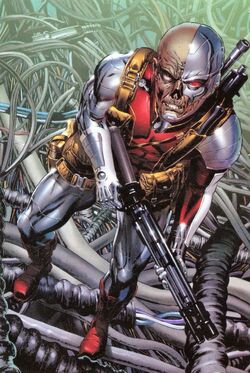 Michael Collins was a computer programmer working for the mysterious and infamous Roxxon Oil Corporation at the conglomerate's branch in the city of Philadelphia. He thought that his programming for artificial limbs was going to be used to help handicapped people in an act to honor his deceased wife's memory, not knowing that it was actually being used for Cybertek and Hydra's dismantled Project Deathlok. Upon learning about this he complained to his the corporation's then-current president, Donald Roxxon.

A desperate and panicking Donald whose intentions were to further resurrect the project of Hydra for his own intentions, had his men abduct Collins to prevent him from exposing one of Roxxon's deepest secrets to the public, and had his brain removed and placed in an upgraded Deathlok body during the secret experiment of the Project Deathlok. Starting from that very moment, Collins finally became the second person to hold the mantle of the legendary mercenary cyborg known as Deathlok, forcibly serving Roxxon for their darkest intentions of assassinating everyone that rivals the conglomerate.

For the next few years in the late 1990s as the cyborg Deathlok forcibly working for Roxxon, he eventually has somehow snapped from the supposedly unbreakable Faustus method with the help of his own access to the advanced technology forged within him, wherein he finally began mercilessly killing those who were responsible for creating him in the Project Deathlok and Roxxon, along with every gang member and other criminals he comes across without any hesitation, proving that having his enhancements had modified him to become the "perfect killing machine."

He even went too far in his vigilante crusade, having no other mercy to execute other fellow vigilantes who dared to stop him in his extremely brutal missions, seeing them as well as no different than the rest of the people who kept on committing crime every single day throughout the large and wide city of Philadelphia, referring to them as "shameless cowards" who've got nothing else to do in their lives. Throughout his career as the assassin-like vigilante, Collins' actions had made him to be one of the top wanted lists by both the authorities and the criminal community, gaining infamy and rivalry among both the heroes and villains alike, such as the web-slinger Spider-Man, the Defenders, the Maggia Crime Family, the Demolisher, even the big bad Punisher himself, and several others.

According to Collins himself and some reports from several police departments across Pennsylvania, that although he wasn't directly exposed to be involved during the events of Ultimate War, he was revealed to be on a killing spree, hunting down every members of the terrorist organizations that were part of the Movement and were causing chaos and destruction throughout the state, including Hydra, A.I.M., and other independent criminals, subsequently protecting Pennsylvania itself in the process due to his selfless actions. In the aftermath of the event, Collins was nowhere to be seen once more since, not until later on after S.H.I.E.L.D. began tracking his every sight and appearances, both previous and recent.

During the beginnings of Heroic Age, Collins was able to track down his former superior Donald Roxxon outside the main headquarters of Roxxon in New York City, where he was close into cornering the abusive that gave him the chance to get his life-long revenge for the man who was responsible for ruining his life forever. Roxxon was panicking, confessing to Collins that the Project Deathlok wasn't his full intentions to begin with, admitting that someone else was the mastermind behind the clandestine experiment that was intentionally planted by the notorious Hydra within the seemingly-innocent Roxxon Corporation.

However, even before Collins could have get the answers that he needed, a hitman working inside the facility had been observing the ongoing assault, to which he immediately shoots Donald with a needle pistol, killing the president of Roxxon instantly. Much to Collins' surprise, he angrily tried to chase down and brutally confront the hitman for ruining his mission, only to be interrupted by the web-slinging hero Spider-Man who misinterpreted the situation as Collins being the one responsible for the assassination of Donald, briefly clashing with the cyborg mercenary. The brief clash ended with Collins gaining the advantage against the hero using his advanced tech, right until the agents of S.H.I.E.L.D., along with the third Deathlok Michael Peterson, came into the scene to deal with Collins' after the scene he caused outside the Roxxon facility.

Collins was one of the Raft's many escapees during Mister Sinister's destruction throughout New York to California after he (while using the remaining Pym Particles) manages to destroy most of the prison's structure, killing most of it's super-powered prisoners and security & staff, but manages to leave a few number of prisoners, including Collins to escape the wrecked facility and started causing mayhem in the streets of New York City. Though most of the prisoners were committing several crimes, Collins was seen to be continuing his vigilante crusade, neutralizing some of the escapees around him using his own weapons.

After Apocalypse's second reawakening, where he brutally battles Sinister in order to prove that he is far more superior than his so-called "follower," Sinister eventually mind-controls Collins and the rest of the villainous escapees to attack Apocalypse. This eventually helped Sinister to gain the upper hand into defeating Apocalypse, until Apocalypse went into a berserk state and kills the mind-controlled prisoners by stomping on them at his giant form. Collins was able to miraculously overwritten the coercive powers of Sinister by the last second thanks to his technopathic powers, but it was already too late, and the gigantic Apocalypse had easily crushed the cyborg to death with his enormous right foot.

Despite his instant death due to Apocalypse's assault, the alliance of both the mutant and Inhuman heroes were able to use Collins' advanced tech, merging it with the mutant from the future Cable's techno-organic based weaponry, something that they used to successfully take down the still-gigantic Apocalypse later on. Even before Collins was splattered by Nur's foot, it was revealed that the latter had planted several micro-sized explosives around his legs that was timed to detonated several hours later after Collins' demise, giving both Mister Sinister and the heroes the opportunity to ultimately defeat Apocalypse for the very second, and hopefully the final time. Unfortunate for the heroes, the Apocalypse they took down and killed was merely an unstable clone made for distraction by the constantly unhinged Sinister who continued his havoc to eliminate most of life (especially mutants) on Earth, but fortunate for them, the real Apocalypse revealed his truce, showing his genuine concern for mutantkind by being eager to [reluctantly] join forces with the Ultimates in order to end Essex's undying assault on his kind.

Retrieved from "https://marvelcomicsfanon.fandom.com/wiki/Michael_Collins_(Earth-61615)?oldid=267087"
Community content is available under CC-BY-SA unless otherwise noted.