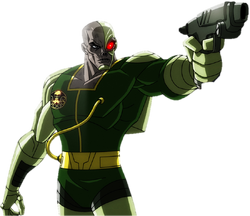 Married
Occupation
Adventurer, computer consultant, software engineer, video game programmer
Origin
Origin
Originally, he was a computer programmer for Roxxon Oil, who was betrayed by his boss and his brain was placed into the Deathlok cyborg.
Place of Birth
Philadelphia, Pennsylvania
Creators

First appearance
Get Your Hexes Right!

Originally, Michael Collins was a computer programmer working for Roxxon Oil. He thought that his programming for artificial limbs was going to be used to help handicapped people, not knowing that it was actually being used for the Deathlok Project.

After he found out about his work being used for the creation of a killing machine, he complained to his friend and boss, Harlan Ryker, not knowing that Ryker was behind the Deathlok Project. Ryker betrayed Collins and had his brain placed into the Deathlok cyborg body.

When Michael awoke, he found himself in the cyborg body, but unable to control it. The Deathlok cyborg was then tested, and Michael watched in horror, unable to do anything, as his cyborg body killed a couple of soldiers.

Ryker was approached by Baron Helmut Zemo who offered him a huge amount of money in exchange of the Deathlok. Ryker agreed and sold the cyborg to HYDRA.

Cyborg Physiology: Deathlok possesses a variety of superhuman attributes as a result of extensive cybernetic augmentation.

Deathlok is an excellent computer programmer. Deathlok's on-board computer system contains the downloaded contents in excess of 17 Cray mainframe computers and can provide him with detailed information on a wide variety of subjects. Through his downloads, Deathlok has gained a broad knowledge of hand to hand combat techniques, as well as detailed knowledge in the use of conventional and technologically advanced firearms.

Despite his cybernetic enhancements, Deathlok is still vunlerable to certain human needs. He still requires the need for oxygen to breathe and sleep. He also requires nourishment, but his simplified digestive system is only capable of absorbing nutrients in a liquified form.

Equipment: None known.
Transportation: None known.
Weapons: He has a plasma pistol build into his body that is powered off his internal plasma reactor. He also carries in a built-in back-pack, and he also has access to a plasma assault rifle and plasma grenade launcher.

Retrieved from "https://marvelcomicsfanon.fandom.com/wiki/Michael_Collins_(Earth-1010)?oldid=256358"
Community content is available under CC-BY-SA unless otherwise noted.