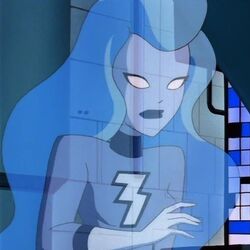 I never wanted to be... this. So many mutants see their powers as a gift, while mine just brings me pain. I don't care for Magneto's agenda of mutant superiority, all I want is to make humanity suffer the way I have.

Mia Warburton developed her mutant powers while attending college in Ireland. At first, she thought she had died and was stuck in Purgatory, but when it became clear that other people could see her, she began to fear it was something much worse. Her mutation had completely altered her cellular structure into a semi-solid gaseous form, completely incapable of solidifying.

She was horrified and depressed, longing for a way to end her suffering, but completely incapable of enacting anything to that effect. She was eventually offered an out when Magneto recruited her into the Brotherhood of Mutants. She had no interest in fighting for her people, but she had grown bitter and slightly unhinged, coming to appreciate the havoc the Brotherhood was able to wreak on humanity.

During a confrontation with the X-Force in Louisiana, Stardust found herself in combat with Magik. She was immensely jealous of her mutation, which essentially just turned her into an expert sorcerer, and attempted to asphyxiate her by sucking out all of her oxygen. But her plan was upended when Magik was able to impale Stardust with the Soulsword, which was the first thing to ever make physical contact with her since her mutation. However, it would also be the last, as it was capable of destabilizing her internal structure, causing her to dissipate to the point of nonexistence.

Incapable of Interacting with Physical Objects