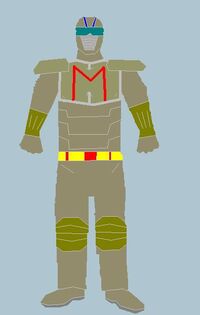 At age 14, Terence Spike realized his mutant abilities while watching iron ore ships. Magneto realizes his power and forces him to become a member of the Brotherhood. The X-Men help him and he becomes an honorary member of the X-Men. When came back to Duluth Mr. Immortal invited to the Great Lake Avengers which he excepted. Terence is often found in Railway yards.

Currently up to 1 Ton

Equipment: None known.
Transportation: Jet/Train
Weapons: anything he morphs from his metal

Retrieved from "https://marvelcomicsfanon.fandom.com/wiki/Metallic_Man?oldid=53292"
Community content is available under CC-BY-SA unless otherwise noted.