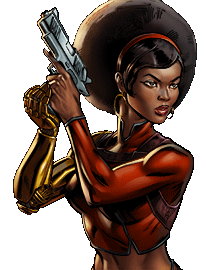 Single
Occupation
Private investigator; former mercenary, bodyguard, policewoman
Education
Metro College
Origin
Origin
Misty graduated the top of her class when training to become a police officer. In the line of duty, Misty tried to remove a bomb planted by terrorists but it exploded before she could throw it. Her arm was amputated and replaced with a bionic arm.
Place of Birth
New York City, New York
Creators

Mercedes "Misty" Knight was born and raised in New York City. She graduated the Police Academy with donors and joined the N.Y.P.D. and rose through the ranks quickly becoming a Lieutenant. She was partnered was partnered with Lt. Rafael "Rafe" Scarfe. During her tenure as a police officer Misty became good friends with Colleen Wing. However on a quiet day, Misty visited the bank. However the someone had also sent a bomb there. Misty tried to get rid of it but it exploded knocking her back, she survived but her arm was blown off. Rafe did his best to rap her arm and get her to the nearest hospital, where he stayed by his partners bedside. Tony Stark took notice of her due to her heroism, provided her with a bionic arm. Unable to continue active duty after being injured, losing her arm she was given a desk job.

Daughters of the Dragon

Misty rejected settling for a desk job and instead left the N.Y.P.D. to start a private investigation business with Colleen; Nightwing Restorations, Ltd. Nightwing Restorations, Ltd became were nicknamed the Daughters of the Dragon. The two specialized in missing persons cases, and came to be known as the Daughters of the Dragon for their training in Eastern martial arts and Colleen's samurai sword skills teaming up with Iron Fist on many missions.

Retrieved from "https://marvelcomicsfanon.fandom.com/wiki/Mercedes_Knight_(Earth-1010)?oldid=198683"
Community content is available under CC-BY-SA unless otherwise noted.