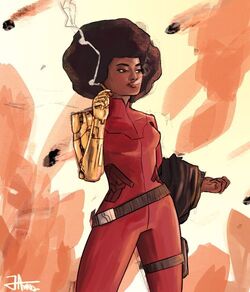 I have more boujee in my arm than you do in your entire body.

Misty Knight was a dedicated detective working in the New York Police Department. She often found herself getting involved with the shenanigans of Jessica Jones and Luke Cage, who she had respect for, but was constantly annoyed by.

Eventually, she got roped up in the conspiracy of the Hand that Cage and Jones were investigating, and during a confrontation with a brainwashed Elektra, her right arm was chopped off by her sword. She was honorably discharged from the Police Department, and fell into a brief depression.

However, Luke and Jessica had befriended Danny Rand, who called in a favor from Tony Stark. Stark was ecstatic to outfit Misty with a bionic arm that would be an upgrade in every way. With her career as a police officer over, she requested employment at Rand International, which had been converted into the Heroes for Hire.

Initially, she just thought she would be a night guard or something of that effect, but Danny Rand had different ideas. He offered a spot on the Heroes for Hire team, framing it as an opportunity to continue doing a public service, and to make a nice living doing so.

Retrieved from "https://marvelcomicsfanon.fandom.com/wiki/Mercedes_Knight_(Earth-101)?oldid=249990"
Community content is available under CC-BY-SA unless otherwise noted.