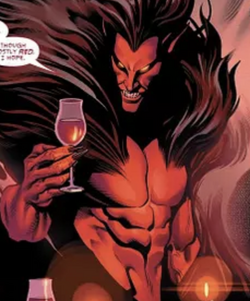 Mwahahaha... this is all so much better than I could have ever dreamed.

Mephisto is the spiritual embodiment of Hell itself. With boundless powers, he has long since flamed the fires of humanity's hatred.

His bitterness towards them is what led to his agreement to join the Order of the World Tree. Once the heroes of Earth began falling, Mephisto was able to seduce the former X-Man Magik to his side. This cemented his alliance with Apocalypse and the Brotherhood of Mutants, who all agreed to one day overthrow Surtur.

Retrieved from "https://marvelcomicsfanon.fandom.com/wiki/Mephistopheles_(Earth-2001)?oldid=262359"
Community content is available under CC-BY-SA unless otherwise noted.