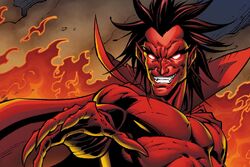 Consider it, this is a good deal for you. I'm not asking for much... just your soul.

Mephisto is an ancient cosmic being who has been around almost as long as the universe itself. He set up shop in Midgard during the early days of humanity because he was enticed by the potential they had for great evil. Eventually, he enlisted his servant, the demon Zarathos, to bond to a human with potential for greatness in order to become the Ghost Rider.

Over the centuries, Mephisto claimed countless souls of both the righteous and the wicked, constantly switching Zarathos over from human to human in order to keep the Ghost Rider alive. After he encountered endless rebellion from the Ghost Rider Johnny Blaze, he transferred the spirt of Zarathos over to Robbie Reyes, who Mephisto viewed as enough of a pushover to follow his orders.

Mephisto eventually offered up his services to Thanos and the Black Order to help them collect the Infinity Stones out of the belief that if Thanos went on to become the overlord of the galaxy, Mephisto's extra-dimensional kingdom would be overrun with death. He was overjoyed at the possibility of billions of souls to torture.

Retrieved from "https://marvelcomicsfanon.fandom.com/wiki/Mephistopheles_(Earth-101)?oldid=250218"
Community content is available under CC-BY-SA unless otherwise noted.