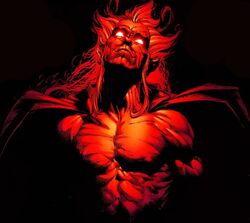 Earth-61615
Base Of Operations
Mobile across Mephisto's Realm
Characteristics
Gender

Many are the good men who can resist murder, theft, and cruelty. But a touch of greed, or a slight hint of laziness? These are the seeds of the ruination that can bring down the best of men to the hells of the earth!

Mephisto is a powerful extra-dimensional demon and Hell Lord whose exact origin is little known, except the fact that he was one of the first entities to ever exist even before the Big Bang of the prime universe, which had led to the subsequent full creation and formation of the universe. He rules a fiery pocket dimension that he calls "Hell" or "Hades," although it is neither the hell of the Judeo-Christian religion nor the Hades ruled by Pluto, the Olympian god of the dead. Mephisto typically calls his extra-dimensional realm the infamous term "Hell," in order to exploit the Earth human beings' belief in a single being of absolute evil, who is often referred to as Satan, who enjoys ruling such a diabolical and mischievous realm of terror.

Approximately twelve billion years in the past (two billion years after the Big Bang), the non-Celestial cosmic entity and primordial archdemon that resides in a pocket nether dimension named Chthon, secretly and tactically wages a great war with his army of darkness and the Allied Empire of Damnation (consisting of Mephisto's ungrateful son Blackheart, the then-current holder of the Satan epithet that was Marduk Kurios, the fallen angel Zadkiel, the mysterious demonic goddess Asteroth, the Cthulhu Mythos, the future Japanese God of Evil Chaos King, a momentarily-possessed Phoenix Force, the future Spirit of Vengeance that was Zarathos, and Mephisto himself after trying to get his father's honor and recognition) against the Conservators of the Cosmos, a democratic council of benevolent, god-like beings who had served as the first guardians and peacekeepers of the young universe, in accordance to the legacy left by a noble sector of Celestials, years before their eventual demises.

The war goes on for the next billion years, which covered most of reality in great darkness due to the slow but progressive forces of Chthon, with the latter seemed like it would last for an eternity. Almost two billion years have passed during the reign of terror inflicted by the Allied Empire of Damnation across the primordial stages of the universe, the conflict was finally won and order was restored by the surging forces of good and ideological supporters of peace. In the fall of the Allied Empire of Damnation, most of its members were completely obliterated from existence and died out, while some others barely survived the ordeal by escaping through other dimensions. In Mephisto's case, the willingly and sadistically abandoned most of his allies to die and made it back through safety, thanks to his free access into his own exclusive realm of Hell as he already senses the staggering defeat of the empire he once served in for almost more than two billion years.

After gaining power, experiences, and worshipers since the Great Billion Years' War, Zarathos was then tempted by Mephisto himself in his return and challenged him for ownership of his realm. Mephisto tricked Zarathos by letting him release a soulless prisoner named Centurious. Centurious' lack of a soul rendered him immune to many of Zarathos' power. With his followers abandoning him, Zarathos was easily defeated and was sent by Mephisto onto Hell. In Hell, he was corrupted and was tortured with visions of humanity's depravity until he went insane before manages to finding his way onto the planet Earth, where he later desires to protect the innocent among mankind was forgotten, and replaced with a twisted lust for punishing the guilty. From there on, Zarathos would punish, burn, and devour the soul of anyone who had sinned that he would find, no matter how small the sin or the age of the sinner. His mission to protect the innocent was perverted into a lust to punish the guilty. He became the Spirit of Vengeance himself as a punishment of choice made by Mephisto.

At one point after the Great Billion Years' War, Mephisto decided to banish his eldest children and only son, Blackheart, from his Hell onto an prison-like dimension below the nether realm where he was trapped in for thousand of centuries, after revealing to his son that he knew of the latter's plans on trying to overthrow his father in his throne in the netherworld. He remained imprisoned in the hellish dimension until he manages to find a way out of it, finding his way escaping into the Earth's dimension at some point during days of the Modern Era, where would he begin inflicting chaos and destruction that he encounters in his every path on the once-benevolent planet.

When Blackheart later finally died during his defeat at the hands of the enraged Ghost Rider, Mephisto would still see him as a major disappointment and a major embarrassment to him for not fulfilling his "simple" request, even though he was already an embarrassment to Mephisto's family since the beginning, though he was still impressed at what Blackheart had done when he managed to scar Johnny by taking his wife's life. In conclusion, Mephisto also had no plans recently or in the future on resurrecting his own son, since there was no way to resurrect him after he died an irreversible demise at the hands of the Rider, or even try to create a duplicate of him, since according to him, the first one was already both a disappointment and an embarrassment to Mephisto's image, what would happen if he created more of those?

Blazes of the Ghost Rider

When the modern age human stunt cyclist Johnny Blaze made a pact with the devil who later became to be revealed as the arch-demon Mephisto, Blaze willingly sold his soul to spare Crash Simpson from the disease that was killing him. The Devil agreed to make the pact on one condition, the condition was the one day he would return to collect his fee for curing Crash of the disease. Lives continued on and no one knew of the pact Johnny had made. Crash Simpson not caring for his life anymore and not knowing of the cure that had ridden the disease from his body, decided to make a giant stunt and jump over twenty-two cars, however when he attempted this, Crash collided into the ground and died.

After Johnny Blaze saw Crash die, his world had crumbled down, he did not think that life could get any worse. Just as he thought that the Devil appeared. Johnny began yelling at the Devil and telling him that he double crossed him, the Devil stated that he had cured Crash Simpson’s disease and that he wanted to claim his reward. With that statement heard he declared that Johnny Blaze would become his Emissary in the dark hours and in the light he would join him in Hades. After Mephisto grafted the essence of his weakened but still vengeful adversary Zarathos onto Blaze, Zarathos would continually take control of Blaze's body. The pact was made, and by day Johnny Blaze would walk among the living, but mostly by night, through the deadly vengeance of Zarathos towards the men of evil, he became the Ghost Rider.

When the angels of Heaven battled fellow Hell Lord Lucifer, he killed half of the angels until he eventually was defeated after he was miraculously vanished into another realm of Hell, ruled by one of the Hell-Lords, Mephisto. He manages to make a deal with Mephisto by giving Lucifer his own realm of Hell to Mephisto to rule it on his own in the exchange of getting him the largest army which is a number of countless centillion legions perhaps, of demons and rebel angels, enough so he can finally to lead a another rebellion against God and whoever stands on his way in an attempt to take over Heaven, one last time.

Eventually, Mephisto grants Lucifer's deal by making him the largest army of fallen angels and demons he could've ever offer to him, armies he gathered from the abandoned realms known as Gog and Magog, which were known to be previously ruled by the ancient people called by the same name. An army composing of countless centillion legions, a thousand times more than most of Heaven's different angelic hosts combined, outnumbering them. Lucifer led his entire army, and charges against the gates of Heaven, who was guarded by the entire angelic host. The angelic host seemed to be defeated and each angel of God begins to perish immediately due to their seer strength in numbers. This day was infamously known before by Judeo-Christian theology and everyone else as the "Battle of Armageddon," due to the battle being taken at the ancient city of Armageddon, a city which was located closest to the gates of Heaven.

Once Lucifer was finally defeated by the Holy Trinity and the many armies of Heaven in the final moments of Armageddon, the Devil hauntingly realized that he was actually betrayed by his fellow Mephisto who never followed their deal properly. Upon the final defeat and eternal death of Lucifer under the hands of his creator by burning forever in the depths of his Hell that was now the Lake of Fire, greatest foes and even some of his allies, Mephisto was relieved and surprised and find it humorously ironic that the concept of "divine intervention" would be something that actually saves him after nervously thinking that his risky act of treachery against Lucifer would be his ultimate doom.

Demon Physiology: Mephisto, commonly known as one of the oldest and most powerful cosmic entities out there, is specifically a powerful demon of a high but unspecified class, and possesses vast supernatural power, which has inherent within him since the beginning of his existence. He is often energized by sources of evil mostly in the human world of Earth, along with other worlds there is across the different functional systems of intergalactic communities of the vast cosmos in the prime universe.

Despite his immense and almighty power, Mephisto does have several significant limitations. He is unable to force the subjugation of any sentient being's will to his own without that being's deliberate submission. He is also incapable of reading the thoughts of any sentient being. Mephisto's powers are linked with his extra-dimensional realm and his powers rapidly decrease the longer he is away from his realm. As a result, he typically uses or manipulates others into performing whatever plan he has in mind. Also, despite continuously trying to get any noble soul to his realm and possession, he must need to corrupt them first, or otherwise, he himself will be, ironically, injured in the process.

Retrieved from "https://marvelcomicsfanon.fandom.com/wiki/Mephisto_(Earth-61615)?oldid=248315"
Community content is available under CC-BY-SA unless otherwise noted.