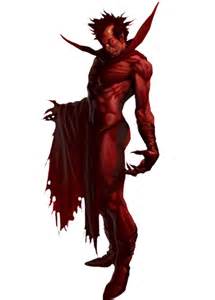 Little is known about Mephisto's life before his association with the Masters of Evil. It can be assumed to be similar to his mainstream counterpart.

Tasked with saving Jean Grey and Nightcrawler, the Ultimate Alliance went to Mephisto's Realm to try and save them. Running into Demons, Fire Giants, and even Blackheart, the Alliance had completed their mission, but with a price. Nightcrawler had to be dropped into the Infinity Vortex in order to save the Jean.

After facing many more demons, the Alliance (now accompanied by Johnny Blaze) confront Mephisto. Seemingly immune to any form of attack (even against his old servant), one of the heroes steals his sword and attacks him with it, making him vulnerable to attack. After taking a few hits, Mephisto reveals that Nightcrawler is not dead, but is instead now his slave. He then proceeds to call forth the young hero and orders him to attack the Alliance. After a long fight, Nightcrawler breaks free from Mephisto's control and sacrifices the last bit of energy he has left to incapacitate Mephisto. Leaving the Realm, the Alliance is racked with guilt because they could not save Nightcrawler when they had the chance.

Mephisto is an experienced and highly skilled liar and strategist. He is also a highly skilled sorcerer with near infinite knowledge of arcane and occult subjects.

Despite his immense power, Mephisto does have several significant limitations. He is unable to force the subjugation of any sentient being's will to his own without that being's deliberate submission. He is also incapable of reading the thoughts of any sentient being. Mephisto's powers are linked with his extra-dimensional realm and his powers rapidly decrease the longer he is away from his realm. As a result, he typically uses or manipulates others into performing whatever plan he has in mind. Also, despite continuously trying to get any noble soul to his realm and possession, he must need to corrupt them first, or otherwise, he himself will be, ironically, injured in the process. This has proven to be the case with Thor and Cynthia von Doom in the past.

Equipment: A crystal that held Zarathos
Transportation: Inter-dimensional teleportation using his own powers.
Weapons: None known.

Retrieved from "https://marvelcomicsfanon.fandom.com/wiki/Mephisto_(Earth-6109.2)?oldid=128839"
Community content is available under CC-BY-SA unless otherwise noted.