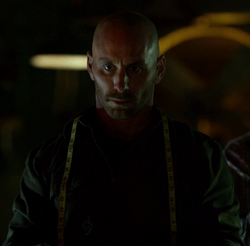 A talented designer, blacksmith and armorer despite some mental health issues, Potter was forcibly recruited by Wilson Fisk to design and build armour protected suits for him. When Potter refused, Fisk warned him that he intended to hurt his friend and carer Beatty if Potter did not do as instructed. Fisk also made Potter build an armoured suit and waistcoat for Leland Owlsley, after he was attacked by a masked man. Owlsley made a comment to Fisk calling Potter half an idiot, but Fisk assured him that it was the other half that mattered.

You're not supposed to be here.

When the man in the mask discovered that Potter was the one providing the body armor for Wilson Fisk, he tracked down his warehouse and looked at Potter's designs. Potter arrived shortly after and panicked, knowing that Fisk had ordered that no one enter Melvin Potter's Workshop without Fisk's permission. Potter told the intruder that he should not be there before attacking the masked man, using items around his shop, such as chains and saw blades which he threw, to fight off the intruder.

Eventually Potter was defeated by the masked man and broke down crying, believing Betsy Beatty's life to now be in danger as Wilson Fisk would find out he broke his one rule that no one is allowed in the workshop without Fisk. Much to Potter's surprise however, the masked man comforted Potter and assured him that he did not work for Fisk but he also knew people who had been hurt by Fisk and was planning on finally bringing down his reign of terror. The man told if he made an armoured suit for him, he would ensure that Fisk never harmed him or Beatty ever again, when Potter asked him what kind of suit he required, the man told him he wanted a symbol.

I haven't had enough time to get all of it through the process, black parts will give the most protection, red might deflect a knife depending on the angle, might not."
"It'll do just fine, thank you Melvin.

Potter did as instructed and made a suit designed around devil imagery and a specially designed Billy Club to the masked man's specifications. When the masked man came to collect the suit, Potter explained the design, noting which areas of the armor were more protective against bullets and knives. The masked man removed his glove and touched the material before telling him that the suit was indeed up to standard. The masked man later used it to fight Wilson Fisk, defeating him and putting him in jail, ensuring that Potter and Betsey were safe.

Expert Martial Artist: Potter is highly skilled in combat. He was able to hold his own in a one on one fight with a injured Daredevil and came close to beating him.

Master Blacksmith: Potter is highly skilled in designing all kinds of body armor and weaponry. He can build light armor that protects the user without interfering with their mobility and speed.

Inventor: Melvin Potter is a genius inventor, typically employed to create protective garments that offer a high degree of protection without trading away flexibility or functionality. He has also constructed personal weapons and equipment as needed.

Asperger syndrome: Melvin Potter's intellect is focused primarily towards inventing, but his gift comes at a price. He is emotionally vulnerable, and has demonstrated child-like mood swings when threatened.

Retrieved from "https://marvelcomicsfanon.fandom.com/wiki/Melvin_Potter_(Earth-1010)?oldid=189973"
Community content is available under CC-BY-SA unless otherwise noted.