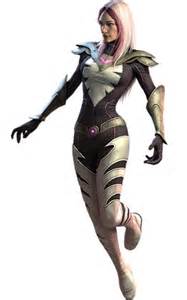 Little is known about Songbird's life before the Civil War. It can be assumed to be similar to her mainstream counterpart.

Songbird was already leader of the Thunderbolts by the time the Superhuman Civil War broke out. As such, she (along some offscreen members) was the only one not injected with nanites and thus forced into the Fold during the Prison 42 breakout. Songbird was also among the heroes in the reformed Ultimate Alliance.

Retrieved from "https://marvelcomicsfanon.fandom.com/wiki/Melissa_Gold_(Earth-6109.2)?oldid=128836"
Community content is available under CC-BY-SA unless otherwise noted.