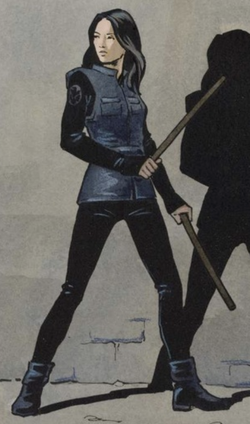 Never call me the Cavalry.

Melinda May was always a cold and closed off woman, but had unlimited love and compassion in her heart for those she cared about. She was one of S.H.I.E.L.D.’s most valued field agents, and was eventually deployed into a hostage situation in Bahrain, where over twenty men were being held hostage, including a few S.H.I.E.L.D. Agents.

After making inside unseen, May discovered that the one holding everyone hostage was a young Inhuman girl, who was clearly out of her mind. She forced her hostages to attack May, who in turn was forced to kill the girl in order to free everyone else from her hold.

Ever since that day, May has become even more distant and closed off. She and her husband, Andrew, divorced, and she retired from field work, opting to instead plant herself behind a desk. For years, she maintained this way of life until her hold friend, Phil Coulson, approached her with the offer to join his team.

Melinda agreed under the condition that she would only be the team’s pilot. Of course, she quickly found herself roped back into the combat and came to accept that sometimes getting her hands dirty was necessary for the greater good, especially if it meant saving the people she cared about.

Over the years working with the team, she and Coulson came to accept their feelings for each other. May had even taken on a maternal role towards the Inhuman Quake, who she hated putting in harms way, but couldn’t help but be proud of how strong she was.

Retrieved from "https://marvelcomicsfanon.fandom.com/wiki/Melinda_May_(Earth-101)?oldid=250546"
Community content is available under CC-BY-SA unless otherwise noted.