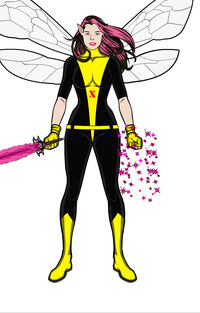 Pixie is a hybrid mutant and fairy and possess powers granted to her both by her mutation and inherit magical abilities.

Retrieved from "https://marvelcomicsfanon.fandom.com/wiki/Megan_Gwynn_(Earth-515)?oldid=53307"
Community content is available under CC-BY-SA unless otherwise noted.