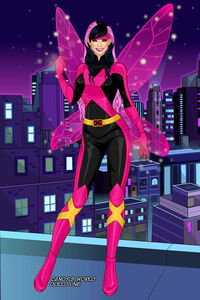 A young Fairy/Mutant Takes reign of Power beyond

The power of White Magic represents the good while the Black Magic stands for evil. However, there is one mutant who is a sorceress, fairy and warrior will defend the fairies but also the mutant kind. In addition, that is Pixie/Megan Gwynn. Megan is the daughter of the evil Mastermind Jason Wyngarde and Mrs. Gwynn. Pixie is a hybrid mutant and fairy and possess powers granted to her both by her mutation among them her amazing unlimited magical abilities, without a clear distinction regarding the source of each power. For weapon choice, she wields her powerful Soulsword. Pixie is also a member of the Young Sorcerers Society she is among some mutants alongside Scarlet Warlock to have memberships there. Pixie has pink hair with a black streak due to gaining her advanced magical abilities. Pixie faced off against the evil fairy named Darkura whom is a descendant of the evil fairies and she plotted to conquer the universe as she did with the Fairy Realm. Pixie and the X-Men confronted the evil fairy and her henchmen. but when the black evil magic Darkura has proved to be too powerful Pixie retaliates with the White Magic Crystal she currently owns and required additional powers of the four elements Fire (Firestar and Sunfire) Water (Namorita) Earth (Tempest, Petra and Magnus) in order to defeat Darkura and the evil fairies. The crystal with Pixie and the four elements prevailed saving both worlds.

Pixie is among the tomboys of the Underground X-Men

Pixie is a hybrid mutant and fairy and possess powers granted to her both by her mutation and inherit magical abilities, without a clear distinction regarding the source of each power.

Same as her 616 Counterpart

Normal for a Teenage Girl

Equipment: None known.
Transportation: None known.
Weapons: Soulsword (Given to her by Illyana Rasputina from an alternate timeline)

Retrieved from "https://marvelcomicsfanon.fandom.com/wiki/Megan_Gwynn_(Earth-16160)?oldid=229374"
Community content is available under CC-BY-SA unless otherwise noted.