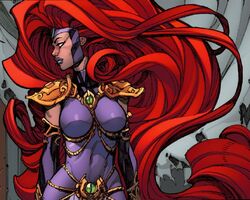 I am honored to have been a part of this, but I must return home to my people.

After serving as the Queen of the Inhumans for decades, alongside her husband, Black Bolt, Medusa would be thrust out of her kingdom after an attack by the Kree. Losing her husband in the onslaught, Medusa rounded up what little of her people she had left and escaped to Earth. They were taken in by her old friends, Reed and Sue Richards, the leaders of the Future Foundation.

Medusa would eventually be recruited into The Outsiders when they needed help from various heroes across the multiverse to repair the further cracks that had been caused by Odin. After briefly serving with the Outsiders, Medusa bid farewell from her newfound teammates to return to her people, but promised them she, and her people, would always be there to help them, should they need it.

Retrieved from "https://marvelcomicsfanon.fandom.com/wiki/Medusalith_Amaquelin_(Earth-9993)?oldid=244569"
Community content is available under CC-BY-SA unless otherwise noted.