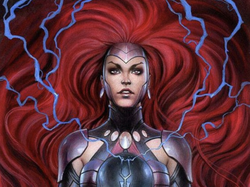 I will do what I must for my people.

Raised on Attilan, Medusa was always favored by her parents over her younger sister, Crystalia, which only made Medusa love her more. She was studying interspecies communication, which is what led to Royal Family to hire her to help develop a language with their mute son, Blackagar.

While working together, Medusa and Blackagar fell in love, and eventually got married. When Blackagar ascended to the throne, Medusa became the Queen of Attilan. After serving the throne loyally for years, Medusa embarked on a secret mission to the Earth to gather information on the growing super-powered population.

However, she was kidnapped by the Wizard, an enemy of the Fantastic Four who was assembling his own team. Medusa was brainwashed into working for him to battle the Fantastic Four, but she was eventually tracked down by Crystal, Triton, and The Reader, who were able to bring her back to Attilan with help from the Fantastic Four.

She eventually had her mind repaired, and formed a good friendship with the Fantastic Four, especially the Invisible Woman. The Royal Family was later informed of the Prophecy of Infinity and began dedicating their forces to try and stop the future. One of the prophecies included the Kree Empire ordering the execution of all Inhumans, so Attilan began tracking down Inhumans on Earth to give them a home.

One such Inhuman was a young man named Dante Pertuz, who Medusa took under her wing to teach him how to control his powers. Over time, the two of them formed a deep bond, and when Medusa began to develop feelings for him, she confided in her husband. After a long discussion, the two of them agreed that if the Prophecy was going to come true, they didn't want to do anything to stand in the way of each other's happiness while they still had the chance, and he gave her his blessing to pursue a relationship with Inferno.

The only caveat was that they had to keep their relationship a secret from the people of Attilan. For a time they were happy, until the time came for the Kree assassin, Wraith, to begin hunting down Inhumans. Black Bolt and Medusa then led a squad straight to Hala, the home planet of the Kree. While there, they discovered Black Bolt's oldest brother, Vox, had been working with the Kree. In the ensuing battle, Black Bolt was impaled by Vox, but not before using his powers to shatter the internal structure of Hala. As he lay dying, Medusa was too heartbroken to tell him she was pregnant with his child. However, his sacrifice did help to prevent the extinction of the Inhuman race, which was a success for the heroes trying to prevent the future.

[[Category: In a Relationship with Dante Pertuz Characters]]
Retrieved from "https://marvelcomicsfanon.fandom.com/wiki/Medusalith_Amaquelin_(Earth-101)?oldid=247471"
Community content is available under CC-BY-SA unless otherwise noted.