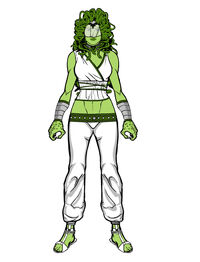 Medusa Amaquelin was born as the first daughter to the Attilanian Royal couple of Lord Quelin Amaquelin and Duchess Ambur Amaquelin. From birth, Medusa was intended for Prince Teles Boltagon in a pressured, socially, and politically arranged marriage. Quelin and Ambur were fortunate in the sense that although their marriage was arranged, their love grew into one that was very strong and true and they hoped the same would happen for their daughters. Fortunately, these hopes were eventually realized, at least in Medusa's case.

Medusa was raised knowing that she was to be the future queen of Attilan. This knowledge impacted and shaped her greatly, as she knew she had to accept a great deal of responsibility even from such a young age. She devoted her time to mastering the social graces and to learning the history and getting to know the people of her country. Medusa had always had a crush on Prince Teles, but was rather annoyed by his slightly haughty nature as a young teen before his Terrigenesis. This led to some somewhat minor clashes between the two's personalities; however, Medusa always tried her best to find love with Teles and eventually the two did.

Moreover, when Medusa reached the age of 15, she underwent her Terrigenesis ceremony. Medusa remained in the Terrigenetic training compound to learn more about her powers, adapt to them, and gain great control over them, as was customary. Every Inhuman, who has undergone Terrigenesis, is matched up with a Terrigenetic trainer in the training compound. These trainers go into their profession with the full knowledge that they are putting themselves in a potential line of danger and so they view this risk as a great and honorable sacrifice. Medusa and her trainer, Stheno, had a strong bond of mutual friendship and respect. Medusa didn't just view Stheno as a subject, but rather as a good friend, confidant, and pseudo-older sister/mother figure.

As Stheno and Medusa were training one day, Medusa's power of her Petrifying Gaze surfaced. After a sparing match, Stheno reached out her arm to help Medusa back up. As Medusa grabbed Stheno's hand and looked up at her face, directly into her eyes, Stheno instantly began turning into stone. Medusa, shocked and horrified at what she saw, screamed out in panic and terror. Then another Terrigenetic trainer ran into the sparing room in order to check on the screams he had heard. Medusa was in tears when he entered the room. He saw Stheno's petrified body and then immediately ran to Medusa's side to see if see was okay. He attempted to shake her out of her inconsolable shock, but as he looked directly into her eyes, he became petrified as well. Medusa became even more distressed and terrified about what was going on with her.

Finally other Terrigenetic trainers, without coming into visual range of Medusa's direct gaze, called Galen in to assess the petrified trainers' conditions, as well as Medusa's. In a frightened panic, Medusa warned everyone, including Galen, to stay away and to especially not look into her eyes. Galen gave her a sedative and ushered her back into the Royal Palace infirmary. Medusa woke up, heartbroken at what her gifts had caused.

Through testing how Medusa's genetic makeup interacted with other living organisms' via eye contact, Vinatos (Galen's apprentice) discovered that direct eye contact must be made in order to trigger the petrification process. Partially obstructed eye contact would not result in petrification, such as the obstruction from a semi-opaque screen or veil, or through the view of a lens or reflection, etc. Vinatos, additionally, attempted to reverse the petrification process of Stheno and the other petrified Terrigenetic trainer, but despite his best efforts, they could not be saved. Consequently, Medusa, from that day on, always wore a veil that covered her eyes. The veil helped Medusa function in everyday life, but the emotional scars of that day would carry with her for the rest of her life and would strongly influence her resolve to make her life mean something in honor of Stheno and the other Terrigenetic trainer who perished in the line of their duty.

A year later, once Prince Teles reached the age of 15, he underwent his Terrigenesis ceremony. Teles' Terrigenesis gave him great, yet uncontrollable gifts. As a result, King Cronus and the Genetic Council decided that Teles should be placed in isolation within a special chamber of the Terrigenetic Training compound. The chamber was designed to greatly dampen the effects of most non-physical Inhuman powers. Teles' stay in the chamber would be indefinite until he was able to master the rigorous mental training needed to prevent himself from uttering even the smallest sound, even while asleep. While Teles was in isolation, Medusa would come visit him each day. The two developed their own form of "Attilanian Sign Language" and grew further and further in love with each shared moment. Furthermore, Teles grew humbled by both his own circumstances and by Medusa's sense of duty, care, and kindness.

Once returned to Attilan, Crystal was pulled aside by Medusa, who scolded her for bringing dishonor upon their family. However, Medusa couldn't help but give Crystal a firm, sisterly hug to let her know how much she loved her and was worried about her. Shortly afterwards, the Fantastic Four tracked Crystal and the Royal Guard back to the lost city of Attilan.

Retrieved from "https://marvelcomicsfanon.fandom.com/wiki/Medusa_Amaquelin_(Earth-515)?oldid=255336"
Community content is available under CC-BY-SA unless otherwise noted.