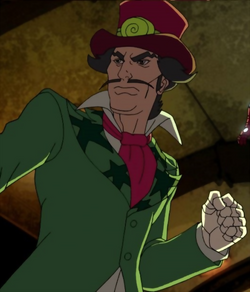 Maynard Tidboldt is the son of Fritz Tidboldt, the former Ringmaster of the Tiboldt Circus during World War II. After the war, his father and mother decided to cooperate with the Allies by testifying against various war criminals. Fritz and Lola Tidboldt continued to manage the Circus, and brought up Maynard to become its ringmaster someday. Maynard, a born showman, developed a deep and sincere love for the circus, and proved to be a master at staging performances. Eventually Fritz Tidboldt and his wife were murdered by Nazis who had escaped capture at the war's end in reprisal for Fritz's testimony against Nazi leaders. Maynard, who did not share his parents' sympathy for Nazism, thus became leader of the circus, and decided to move it to America, far from the scene of Hitler's rise to power and his parent's deaths. There Maynard planned to begin a new, honest life.

But once in America, Tidboldt learned that a relatively small circus such as his could not hope to compete with enormous troupes like the circus owned by Amos Jardine. Tidboldt had dreamed of making his circus a major success, but instead he could barely cover his expenses. Blaming Americans not only for ignoring his circus, but for his father's humiliating capture in America years before, Tidboldt decided to turn to crime: if Americans would not enrich him and his performers willingly, then they would be forced to do so. The key lay in the plans to the "nullatron," a machine designed by unknown scientists in Nazi-occupied lands whom the Red Skull had murdered. The Skull had then used the nullatron to take hypnotic control of Captain America, Sub-Mariner, and the original Human Torch, all of whom were eventually freed from its control. Fritz Tidboldt had managed to obtain the plans for the nullatron during the war, and they had been inherited by Maynard. Maynard Tiboldt now decided to put the principles behind the nullatron to his own uses. Using his own talent for electronics, Tiboldt adapted the nullatron plans so as to construct a small but powerful device, which he would conceal within his large ringmaster's hat, able to mesmerize an enormous crowd all at once. An entire audience, thus rendered helpless, could then be robbed at will by the circus troupe, and would have no memory of being robbed upon awakening. Tiboldt outlined his plans to the members of his troupe, some of whom had accompanied him to Europe, and others of whom had joined the troupe after it came to America. A good percentage of the troupe quit, refusing to turn to crime (Tiboldt hypnotized them so that they would not betray his plans to the police.) However, a surprising number of the circus members eagerly agreed to join Tiboldt in a life of crime, and they became the nucleus of what was later known as the Circus of Crime.

Skilled with electronics, mostly self-taught. Trained in various acrobatic and athletic skills, but not a master of any discipline. He has rudimentary knowledge of hand-to-hand combat. Tiboldt is also noted for his "hypnotic expertise".

Retrieved from "https://marvelcomicsfanon.fandom.com/wiki/Maynard_Tiboldt_(Earth-1010)?oldid=144945"
Community content is available under CC-BY-SA unless otherwise noted.