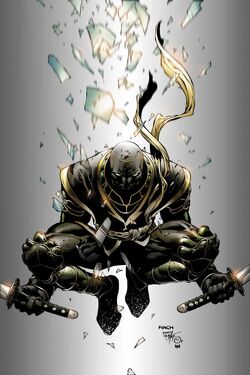 Well, here I am again. Right back where I started. Maybe I'll have better luck in a different crowd.

Ronin's history is the same as that of Earth-616's Echo up until the Marvel NEW! relaunch.

After surviving her seeming death at the hands of Count Nefaria, Maya rejoined the New Avengers as Ronin. She was incognito until she revealed herself, indicating she may be able to mimic powers as well as combat. Maya appears to be more secretive since her resurrection, but why is unknown.

Photographic Reflexes: Ronin retains her combat mimicry powers. She has also been theorized to be either a tactile telekinetic or a power mimic.

Echo is a master of martial arts and combat in general, and possibly a tactile telekinetic. She is an acrobat, and has trained with all weapons known to man.

Equipment: None known.
Transportation: None known.
Weapons: Ronin wields dual swords, a bow and arrows, and a gun armory.

Retrieved from "https://marvelcomicsfanon.fandom.com/wiki/Maya_Lopez_(Marvel_NEW!)?oldid=84234"
Community content is available under CC-BY-SA unless otherwise noted.