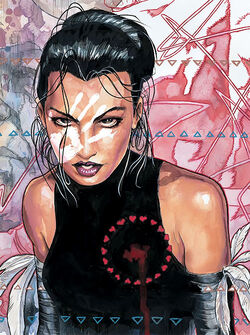 I've lived most of my life keeping secrets. But I don't know how much longer I can do this.

Maya Lopez grew up in Mexico, where her father trained her how to defend herself. She eventually immigrated to America, and was recruited by Potts International after she tested positive for Inhuman DNA.

Maya was put through the process of Terrigenesis and emerged with the inability to die, healing instantly from any wound inflicted upon her. She took on the name Echo, and became one of Potts International's street level heroes, acting mostly in Texas and Nevada.

Echo eventually entered into a secretive relationship with the Squadron Supreme second in command, Captain Marvel. They knew that if Potts knew about their relationship, there would be hell to pay, so they only meet in private, which Echo is growing tired of.

[[Category: In a relationship with Carol Danvers Characters]]
Retrieved from "https://marvelcomicsfanon.fandom.com/wiki/Maya_Lopez_(Earth-1515)?oldid=245825"
Community content is available under CC-BY-SA unless otherwise noted.