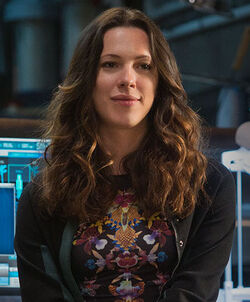 Dr. Maya Hansen was a research scientist working on a revolutionary process to rewrite genetic codes when she attended a New Year's Eve party in Bern, Switzerland, where she met the rising star inventor Tony Stark. They were enjoying their evening together when Aldrich Killian also tried to vie for Stark's attention. While Stark only brushed off the unwanted intrusion, Dr. Hansen accepted Killian's contact details on his behalf, yet with little regard. When she awoke on New Year's day after sharing a bed with Stark, Dr. Hansen discovered that Stark had discretely left, discarding her as easily as he had Killian.

In the wake of that night in Switzerland, Dr. Hansen approached Aldrich Killian, and was accepted into the ranks of his fledgling company, Advanced Idea Mechanics. She brought her research with her and eventually the development of her Extremis virus led to her leading a 40-strong team of A.I.M scientists.

The downside of Extremis was its explosively unstable nature. Some hosts would accept it, and remain somewhat stable with regular infusions and treatment while some exploded violently. When Extremis was tested on human subjects a number of them went critical in public, causing Killian to invent a terror plot cover story to keep A.I.M.'s involvement a secret. Dr. Hansen, unaware of the extent of Killian's machinations, approached Stark directly after he made some public boasts about stopping the acts of terror. She had reason to believe Killian and the terror plot might be connected, but moreover wanted Stark's assistance in aiding her Extremis research.

Dr. Hansen wasn't the only one drawn to Stark's residence by the news media boasts, however. Armed helicopters arrived to deliver a reactionary blow and remove one of the prominent obstacles to the hidden terrorist plot. Dr. Hansen found herself escaping the mansion in the company of Pepper Potts, protected by the Iron Man Armor, as it was torn apart around them.

Days passed, and with the world believing Stark had been killed in the destruction of his home, Dr. Hansen learned the truth when she encountered him being imprisoned and lectured by Aldrich Killian at his Miami residence. Killian wanted Stark's cooperation as much as Dr. Hansen had, but she was appalled by the lengths which he was prepared to go to to get it. She picked up an ampule of the Extremis virus and threatened to administer a lethal dose to herself to force Killian to release Stark. Killian simply responded to the threat by rounding on her and shooting her in the chest.

Retrieved from "https://marvelcomicsfanon.fandom.com/wiki/Maya_Hansen_(Earth-1010)?oldid=148535"
Community content is available under CC-BY-SA unless otherwise noted.