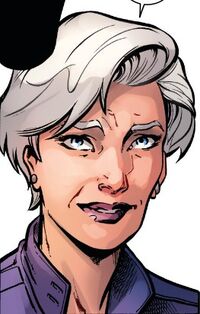 Remember when I told you the Slingers were just another group of hooligans? Well... I was wrong. They're heroes.

May Parker and her husband, Ben, adopted their nephew and niece, Peter and Teresa, after the death of their parents. They both worked at F.E.A.S.T., where May met her best friend, Anna Watson.

After Ben was murdered by Dennis Carradine, she cursed the dauntless gang activity of New York, including the Slingers. She eventually soften and became more devoted to those affected by the ongoing gang war. During the Goblin Nation's siege of New York, May was present to witness the Slingers rescue the inhabitants and prevent the destruction of F.E.A.S.T..