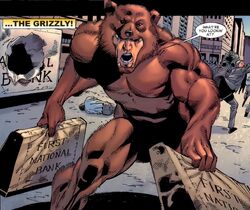 Grizzly's history is identical to that of his Earth-616 counterpart up until Juggernaut was launched into space by Skaar. He was one of the villains defeated (he specifically was "tamed") by the combined duo of Sandman and Juggernaut.

Grizzly has undergone a series of power enhancement procedures that have granted him a variety of superhuman abilities.

Grizzly is a formidable hand-to-hand combatant, using a form of wrestling that allows him full use of his strength.