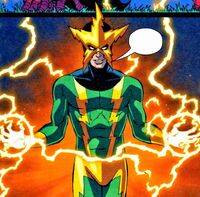 The NYPD call him the Electrocutioner. He's known to give his victims a lethal dose of electric shock.

Electro was a mercenary with electricity powers nicknamed the Electrocutioner. He was hired by Norman Osborn to test the Masked Marvel. HE attacked him on Suicide Street. He easily overpowered Marvel due his inexperience and almost subdued him, with only his superhuman strength and stamina keeping him going. When Electro was mocking a downed Marvel, the vigilante grabbed a discarded wrench and sucker punched Electro.

Retrieved from "https://marvelcomicsfanon.fandom.com/wiki/Maxwell_Dillon_(Earth-774237)?oldid=186033"
Community content is available under CC-BY-SA unless otherwise noted.