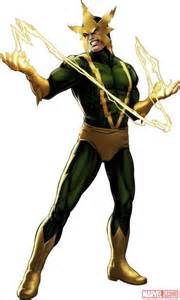 Little is known about Electro's life before the Secret War. It is assumed to be similar to his mainstream counterpart.

Electro was was given an upgraded suit from Lucia von Bardas, Electro used his powers to control electricity to supercharge Latveria to support the Tinkerer's research lab. When Fury led an unsanctioned attack on the country, Black Widow informed them of the benefit Electro served for the country, and they tracked him to a church where they fought. During the battle Electro tried to recharge with various power generators, but they were destroyed and Electro was defeated. Fury and his team continued their assault on Latveria, and eventually destroyed Lucia von Bardas' castle and the Tinkerer's lab.

Two years later, the Latverian Army began an underground attack on New York City, and the Ultimate Alliance was deployed to stop them. It was revealed that Lucia von Bardas, now a cyborg, was leading the attack. The Alliance attacked her, and in an act of desperation, used the special suits made by the Tinkerer as bombs. For unknown reasons Electro was not among the super villains, and later Electro was injected with nanites and was forced into the Thunderbolts for the Pro-Reg forces in the superhuman Civil War. He would be turned into a member of the Nanite Fold, become part of its second attack on Wakanda, and was eventually released with the other Nanite-based captives when the Nanite Nick Fury was defeated and the signal was shut down.

Some time after, Electro was invited by Doctor Octopus to form the Sinister Six, gaining an upgraded version of his original costume in the process, made to better withstand impacts. Several months pass, and the Secret Invasion becomes known to the authorities. The Sinister Six becomes a temporary ally to the Ultimate Alliance because of it. Electro stumbled on a Maggia operation discovered, and aided in their defeat.

The UA attempts to contact the Fantastic Four to help them against the Skrulls & to create something to identify Skrull impostors from humans. However, after 2 failed attempts to radio the Baxter Building; a squad composed of Electro, his long-time nemesis Spider-Man, Toxin, and Deadpool are sent once again for investigation. Getting inside, the team reaches the 35th floor; only to discover a captive Fantastic Four, their captors of course being the Skrulls. After besting them and a re-purposed Dragon Man android, the team frees the Four and escape.

When he is fully charged, Electro is extremely sensitive to anything that may "short circuit" him, such as water.

Retrieved from "https://marvelcomicsfanon.fandom.com/wiki/Maxwell_Dillon_(Earth-6109.2)?oldid=155904"
Community content is available under CC-BY-SA unless otherwise noted.