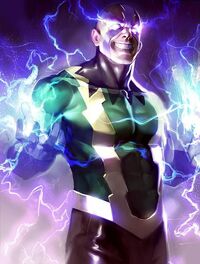 Maxwell "Max" Dillon was born in New York. His father, Jonathan Dillon, was often fired, so they had to move a lot. One day, he ran away, and Max's mother became overprotective. She even didn't want him to leave home and go to college. Max was interested in working with electricity, so his mom told him to go and work for the local electric company. When Max became 24 years old, his mother died. At the time, he was one of the best lineman the electricity company had. He later married Norma Lynn, but they divorced quickly again.

One day, another lineman got stuck on an electricity line. Max decided to save him, but when he tried to, he was struck by lightning. That was how he got his super powers. Max had become a living electrical capacitor.

Because of his love of money, Max started doing criminal things, like robbing banks. During this time, he created his new personality; Electro. Then, one day, he encountered what was to become his greatest enemy; Spider-Man. J. Jonah Jameson actually thought that Electro and Spider-Man were the same person, but when Spider-Man defeated Electro, it was proved he was wrong.

After being defeated by Spider-Man many times, Max decided he needed to become stronger. He went to the biggest power plant in New York, and absorbed a lot of electricity. He had now become a being of pure electricity. In the proces, however, he had drained power of the half of New York.

At the time the Avengers arrived, Max had already left. With the help of Thor, Quicksilver and some other superheroes they were able to bring back the power.

The Avengers: A New Age!

More to be added soon!

Retrieved from "https://marvelcomicsfanon.fandom.com/wiki/Maxwell_Dillon_(Earth-333)?oldid=68028"
Community content is available under CC-BY-SA unless otherwise noted.