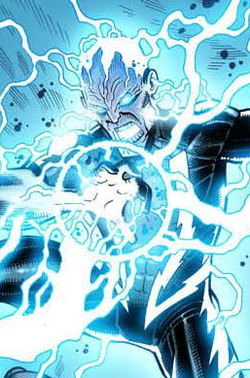 Who's in the mood for a little barbecue?

Max Dillon was one of Potts International's test subjects who survived Terrigenesis and gained the ability to control electricity. However, Max had no intention of being a corporate stooge, and quickly betrayed Potts. He would later go on to be recruited by AIM to be one of their Enforcers. Despite AIM Agents holding disdain for Inhumans, Electro has threatened his way into a top spot within the organization.

Electro later had his molecular structure disrupted by Thunderstrike during battle, effectively killing him.

Retrieved from "https://marvelcomicsfanon.fandom.com/wiki/Maxwell_Dillon_(Earth-1515)?oldid=244567"
Community content is available under CC-BY-SA unless otherwise noted.