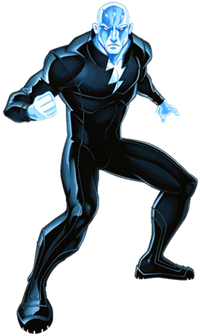 Maxwell Dillon was born in Endicott, New York, the son of Jonathan and Anita Dillon. His father was often fired from jobs making them move a lot. One day his father walked out on them and his mother became overprotective. When he wanted to leave home to go to college, his mother was against the idea and told him if he was interested in learning about electricity that he should work for OsCorp. His mother died when Dillon was twenty-four while he was working at the electric company. There he became one of the best linemen. He also met and married a fellow co-worker Norma Lynn, but she left him when she realized he wasn't ambitious enough to become an engineer and he stayed a lineman. Dillon has, since then, a huge desire to be known and remembered by people to the point of craziness.

After joining the Sinister Six, Alistair Smythe and Norman Osborn gave Maxwell superpowers by electrocuting him.

Some time later, Max (now going by the name "Electro"), was sent to attack Times Square to get attention from Hydra. However, Spider-Man and his friends stopped him.

Thanks to the electricity circulating through his body, his strength is augmented to the point where he can lift over 450 pounds.

Equipment: None known.
Transportation: Electro is able to 'ride' electricity.
Weapons: None known.

Retrieved from "https://marvelcomicsfanon.fandom.com/wiki/Maxwell_Dillon_(Earth-1010)?oldid=97483"
Community content is available under CC-BY-SA unless otherwise noted.