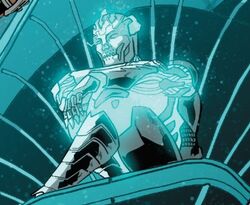 What do I need with money? I'm living energy!

Max Dillon was a fairly normal guy. He liked hooking up with women and he liked drinking beer. He even liked his day job as an electrician. He felt like he understood circuit boards more than he would ever understand people.

Eventually, Max became good friends with one of his frequent clients, Dr. Curtis Connors, whose lab was stationed at Max’s alma mater, Empire State University. One day, Max was repairing a fried circuit board while Dr. Connors and his interns, Peter Parker and Gwen Stacy, were studying genetically altered electric eels.

Things went wrong when the circuit board began malfunctioning and exploded, sending Max flying directly into the eel tank. Overwhelmed with electric energy, Max blacked out and thought he was dead. However, when he woke up he discovered his molecular structure had been mutated into pure electricity, and he was being held in a containment suit.

Becoming enraged, Max broke free from the suit and went on a rampage, which attracted the attention of Spider-Man. As the two battled, Max named himself Electro, and grew an instant distaste for Spider-Man. Believing himself to be unstoppable, Electro became drunk on power and started hatching a plan to insert himself into Oscorp’s mainframe to expand his reach exponentially.

However, Spider-Man had developed an electricity-proof suit, and was able to defeat Electro, who was then incarcerated in the Raft. He wouldn’t be there long, though, as he was eventually freed by Doctor Octopus, who recruited Electro into the Sinister Six.

Over the years, the Six would clash with Spider-Man several times, never quite able to accomplish their goal of killing him. Things changed when they were approached by Screwball, who recruited them for her livestream titled “The Death of Spider-Man”.

Electro unleashed all of his power onto the web-slinger during their battle, unaware that they had attracted the attention of the Avengers. While most of the Six became nervous, Electro was overjoyed to test his power on Earth’s mightiest heroes. But he was eventually confronted by Thor, the God of Thunder. Their battle ended with Thor absorbing Electro into Mjolnir and expelling the excess energy, essentially killing him.

Retrieved from "https://marvelcomicsfanon.fandom.com/wiki/Maxwell_Dillon_(Earth-101)?oldid=249547"
Community content is available under CC-BY-SA unless otherwise noted.