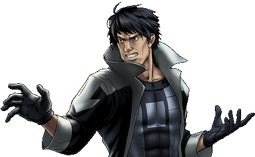 Maximus, an Inhuman, was the second son of two of Attilan's top geneticists, Agon, the head of the ruling Council of Geneticists, and Rynda, director of the Prenatal Care Center. Subjected to the DNA-altering Terrigen Mist when he was an infant, Maximus peculiarly showed no outward sign of any mutagenic change. As he matured, he hid his developing psionic powers from the community but was less successful at disguising his antisocial tendencies. When he was about sixteen, his elder brother Black Bolt was released from the protective chamber in which he had been confined since birth due to the destructive nature of his Terrigen mutation. One of Maximus' first ploys was an unsuccessful attempt to force his brother to unleash his highly destructive vocal powers in order to have him reincarcerated. A month later, Black Bolt witnessed Maximus making a treacherous pact with an emissary of the Kree, the alien race responsible for genetically accelerating the Inhumans eons before. In an attempt to stop the fleeing emissary so that he could be questioned by the ruling council, Black Bolt used his forbidden power of the quasi-sonic scream and blasted the alien ship out of the sky. When the ship crashed to earth, it landed on the parliament building, killing several key members of the Genetics Council, including the boys' parents. The reverberations of Black Bolt's voice also affected Maximus, who was standing nearby, addling his sanity and suppressing his nascent mental powers. When Black Bolt assumed the throne shortly thereafter, Maximus vowed to oppose his brother and eventually usurp his rule.

Maximus staged his first successful coup a few years later. By performing an illegal experiment on the Alpha Primitives, the subhuman worker clones that once served the Inhumans, Maximus created the Trikon, three bodiless energy beings of great destructive power. While the Trikon wreaked havoc in Attilan, Maximus was able to drive the Royal Family of the Inhumans out of the city in search of the amnesiac Medusa. In the several year interval before Black Bolt and his cousins located her in America, Maximus ruled Attilan in Black Bolt's stead. Feeling secure in his position, Maximus bade his servant, the Seeker, to locate the Royal Family and bring them back to Attilan.

Immediately upon doing so, Black Bolt seized the crown back, to Maximus' dismay. Maximus, hoping to win back the public's affection, activated the Atmo-Gun device he had been working on, a machine he believed would kill the human race and leave all other living beings intact. Maximus miscalculated, however, and the device had no effect. Out of spite, Maximus used the device to erect a "Negative Barrier", a dark force sphere around Attilan, imprisoning the entire race inside. For many months the Inhumans tried to find away to get through the barrier. Maximus built the Water-Circulation Apparatus for Triton that allowed him to survive outside of water, which annoyed Gorgon because Maximus should be building a device to free them. Black Bolt eventually liberated his people by using his quasi-sonic voice to destroy the barrier, at the price of devastating Attilan's ancient architecture.

Maximus possesses a degree of superhuman strength derived from his eugenically superior Inhuman heritage and his intensive regimen of regular exercise. Besides strength, Maximus possesses certain physical skills superior to those of human athletes. His Inhuman metabolism affords him slightly greater reaction time, endurance, and speed than the human race's most perfect physical specimen, Captain America.

Mind Control: Maximus possesses the ability to override the thought processes of other brains around him, although the potency of this power varies greatly over time. At its peak, Maximus can overtake the minds of others. While he is capable of numbing the minds of as many people as there are within a 20-foot radius of him, he can only direct one sort of behavior at a time. He can impose a certain behavior on either a single individual or as many people as are in his radius. Maximus is especially good at controlling the actions of the limitedly intelligent Alpha Primitives worker class. Maximus' power can even cause short-term amnesia if he overpowers a mind with sufficient force. He can blank people's minds or control their actions for as long as he so concentrates: they revert to normal as soon as he stops.

Genius-Level Intellect: Maximus is an inventor of genius level intellect. Despite his mild insanity, he retains an excellent theoretical and practical knowledge of mechanics, physics, biology. He is particularly gifted at fashioning elaborate machines out of common, simple materials.

Maximus possesses the normal strength of an Inhuman male of his age, height, and build who engages in minimal regular exercise.

Equipment: His technology achievements, have included;

Retrieved from "https://marvelcomicsfanon.fandom.com/wiki/Maximus_(Earth-1010)?oldid=183300"
Community content is available under CC-BY-SA unless otherwise noted.