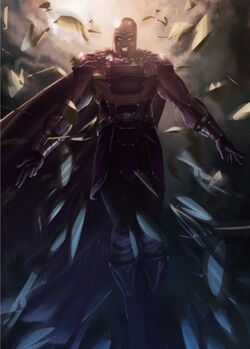 All my life, I've been at the mercy of men just following orders... Never again.

As a boy, Max Eisenhardt was forced to live in a death camp during the Holocaust. When first incarcerated with his family, Max pulled apart a metal gate as he was separated from his parents. Seeing this, the Nazi collaborator and secret mutant Sebastian Shaw had Max brought to him. He was fascinated by the boy's potential and attempted to get him to move a German coin. When this failed, he had his mother brought in, threatening to kill her if he couldn't succeed in moving the coin. When it didn't work, he shot the woman, causing Max to tear apart the lab in horror. Shaw then tortured him over the next several years in an attempt to draw out the boy's mutant powers.

Years later, Max was now undergoing the name of Erik Magnus Lehnserr (simply Erik Lehnserr), starting a new life in the United States of America. Following the conclusion of World War II, Erik spent years trying to find Shaw and exact vengeance, murdering other Nazis along the way and keeping the coin as a reminder of what the man had done to him.

He eventually tracked Shaw down to a small boat off the American coast during the height of the Cold War. His attempt at revenge was cut short when he was pummeled by Shaw's cohorts in his Hellfire Club, outnumbered and outclassed by their mastery of their mutant powers. He was eventually saved by fellow mutant, Charles Xavier who was with Moira MacTaggert and the CIA at the time, and was also finding the Hellfire Club. Together and with CIA support, Xavier and Erik gathered a team of young mutants to battle the Hellfire Club, who were attempting to start a nuclear war between the Soviet Union and the United States as part of a plot to eradicate non-mutant life on the planet and rule over the new world order. Unfortunately, he ultimately leaves the X-Division (later now known as the X-Men) after successfully killing Sebastian Shaw during the mission, defeating the Hellfire Club. He left due to his different beliefs in humans with Charles, believing that mutants should never ever take orders from humans ever again and believes that mutants shall be the superior race of the Earth.

Increasingly convinced humanity would not peacefully relinquish the planet to Homo Superior, Erik became more radical and cynical. Abandoning his real name, Erik took the title Magneto. Realizing that Xavier didn't agree with his views, a paranoid Magneto took to wearing the helmet previously owned by Sebastian Shaw to prevent the psi intrusion into his mind. Xavier decides to confront Erik alone and finally manages to convince and fled with a handful of followers to abandon Erik's Brotherhood, but Magneto decided to teach him and the other followers a lesson and broke his spine, leaving him crippled.

Soon after Xavier's escape, Magneto led his established Brotherhood of Mutants in an anti-human campaign of political assassinations and terrorist bombings. A few years later, Magneto and the Brotherhood moved to a remote island in the Pacific known as Genosha, to avoid high profile from the public and build their own civilization as Mutant Supremacists. Erik even devised a new language to his followers, and through his technical intelligence, he started his own kingdom he named, "The Citadel."

After the defeat of Trask and the Sentinels, the Brotherhood and the X-Men remained arch-enemies again, as usual. It was later revealed that most of the unused Sentinels were stolen and reprogrammed by Magneto and the Brotherhood and was used as the guardians of the gates of his citadel, at the island of Genosha.

After reawakening from his sleep, Apocalypse meets him in his citadel at Genosha and convinces him to join him as one of his Horsemen and bestows even more power upon him, giving Magneto the power to move the Earth's core. Due to his abandonment to his own Brotherhood, the team disbands and separated their ways after their leader left the mutant supremacy. Some did remain loyal to the Brotherhood but with no one to lead them, the Brotherhood is still powerless.

Charles Xavier discovers what happened and tries to reach Erik, but it was to late. Magneto leaves with Apocalypse and attempts to destroy the world. While trying to damage the Earth's core, he is confronted by Mystique and Quicksilver. Together they manage to convince him to join them and fight against Apocalypse. After Apocalypse's defeat, Xavier and Erik are finally able to reaffirm their friendship, and Erik returns to rebuild Charles' destroyed mansion. Though Charles asked him to stay, Erik declined and left, albeit on friendly terms this time. Eventually, Erik returned into leading the Brotherhood, revealing that he still have some hatred for humanity left in him. Due to this, his friendship with Charles and his old friends went crooked once again, since they still have different ideologies.

Homo Superior Physiology: Magneto was an Alpha-mutant, and has been stated on several occasions to have been one of the most powerful mutants.

Retrieved from "https://marvelcomicsfanon.fandom.com/wiki/Max_Eisenhardt_(Earth-61615)?oldid=265667"
Community content is available under CC-BY-SA unless otherwise noted.