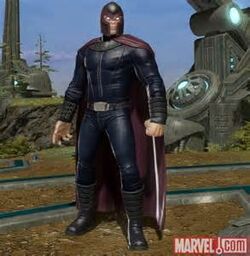 Unusual Features
Magneto has been devolved into an infant by Alpha "the Ultimate Mutant" and regrown by Erik the Red into a younger adult; so that, despite his much greater chronological age, he appears still to be a relatively young man.
Status
Citizenship

Little is known about Magneto's life before the Masters of Evil's attack on the S.H.I.E.L.D. USS Alpha Helicarrier. It can be assumed to be similar to his mainstream counterpart.

Magneto was one of the heroes to join the Ultimate Alliance, having become a member of the X-Men prior. He was later seen defeated by Doctor Doom along with other heroes.

When the Superhero Civil War broke out, Magneto (along with other X-Men members) was apart of Captain America's anti-registration forces. During the Prison 42 breakout, Magneto and other heroes from both sides were among the heroes still trapped in the Negative Zone (and thus became part of the Fold since the self-destruction failed). He & Quicksilver were later seen fending off the Alliance with the Tinkerer.

Transportation: Capable of flying under his own power (which he tends to do most of the time), Blackbird, Quinjet
Weapons: Magneto relies primarily on his natural powers, although he has occasionally used magnetically-powered devices he invented, such as his machine for inducing earthquakes and volcanic eruptions from afar. Magneto used to employ mechanisms for magnifying his own powers, but, since his rejuvenation, he no longer needs them.

Retrieved from "https://marvelcomicsfanon.fandom.com/wiki/Max_Eisenhardt_(Earth-6109.2)?oldid=128879"
Community content is available under CC-BY-SA unless otherwise noted.