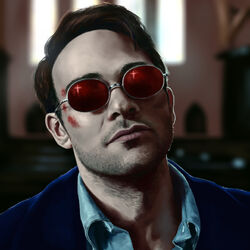 Even a blind man can see the world's gone to Hell.

Matt Murdock became the vigilante Daredevil after having an experimental chemical splashed into his eyes as a child, which enhanced his other senses. After working alone for some time, he was recruited by S.H.I.E.L.D. to help fight against the forces of Apocalypse.

After S.H.I.E.L.D. fell, Daredevil attempted to rendezvous with the rebel team, the Avengers, but ended up being captured by Apocalypse's Armada. He was then imprisoned in the Sphinx, a death camp for former superheroes. He was one of the few people in the Sphinx to side with Black Widow, who was planning a rebellion against their captors.

However, the rebellion failed. Once news of Mister Sinister's death spread, the Archangel ordered mass extermination of the human prisoners. Matt, along with several others, was then forcibly led to a Terrigenesis Chamber, where he was exposed to the Mists and died, due to lacking Inhuman DNA.