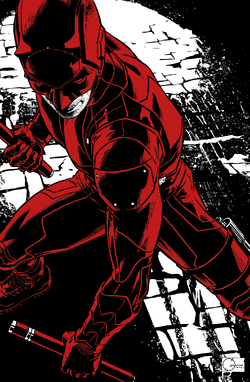 Single
Occupation
Adventurer, vigilante, Attorney and Lawyer at Law, short order cook
Education
J.D. in law at Columbia University, Law School at Harvard; self-taught in mechanical engineering
Origin
Origin
Matt Murdock became Daredevil when he got his powers by losing his sight at the age of 12, and because a criminal named The Fixer had his father Jack Murdock murdered because he wouldn't throw a boxing match right before Matt graduated law school.
Place of Birth
New York City, New York
First appearance
Modern Comics: Daredevil Vol 1 1

I'll be honest with you... My life would be a lot easier without us locking horns! But I'm not trying to do the easy thing, but the right thing! And that's why the Kingpin must be allowed to return, no matter what...

As a child, Matthew Michael Murdock was blinded by radioactive waste while trying to save an elderly stranger about to get hit by a truck carrying the dangerous material. He awoke in the hospital blind from the toxins and learned that his other senses were amplified as a result of his loss of sight and was able to see by a radar-like sense using natural sounds around him, giving him ultimate confidence in his surroundings. In turn, his other senses were heightened to superhuman sharpness and he gained a form of "radar sense." After the following tragic events, when Matt's father Jack was killed by the Roscoe Sweeney and his hired men after a disagreement, he was sent to an orphanage where he later grew up.

Originating from his exposure to a radioactive isotope, Murdock's heightened senses were actually latent "gifts," that the isotope unlocked. Matthew then met a blind, martial arts master named Stick, who taught him to hone his senses and trained him in martial arts among other skills such as free running, meditation and marksmanship. He was taught how to control and use these senses by Stick, making him to keep his extraordinary senses in control and stable. Through Stick's training, Murdock learned from a young age to use his senses to accomplish superhuman feats.

In his early twenties, Murdock gained a place at Columbia University Law School. He arrived in his room and introduced himself to his new roommate Foggy Nelson. Nelson had heard of Murdock, as he remembered what had happened to him as a child. Murdock and Nelson immediately formed a strong relationship and Nelson often joked about his blindness while Murdock would tease Nelson about many of his poor life choices. He also met and became enamored with the mysterious Elektra Natchios. The two would eventually became romantically involved, but the relationship ended after she tried to get him to kill Roscoe Sweeney, who was his father's true killer.

Matt's expanding senses allowed him to hear the city better, and he realized there were more sirens that he used to listen to, and that there was more suffering in Hell's Kitchen than he knew. This turn of events motivated him to want to change the city for the better. When he reached adulthood, Matt became the vigilante and hero, known as the Daredevil in order to make his entire city a better and safer place. His actions as a crime fighter would've put Murdock into conflict with one of New York's most notorious crime-lord named Wilson Fisk, the Kingpin. Murdock continuously used his skills, both as a morally righteous lawyer and a brutal vigilante, in order to expose Fisk's criminal activities and have him taken to prison.

At some point in his life, the Daredevil had few several encounters and alliances with the other vigilantes and heroes across New York City, such as the Black Cat, Spider-Man, Power Man, Iron Fist, and Jewel. They later decide to form a single alliance, a team perhaps, in order to keep the streets of New York safe and sound from the clutches of crime and evil. From time to time, they were eventually dubbed as the Defenders, by those who have seen them take on criminal activities in action.

Daredevil's actions throughout New York City and his strict moral code to never kill anyone he apprehends, from street thieves to serial killers had influenced many innocent lives to learn how to defend themselves from the rising of crime. Soon, it would've put him into conflict with the Punisher, a vigilante who believed that death was the only punishment for crime. Daredevil was thrown into more turmoil by the return of his old lover Elektra and his former mentor Stick, who attempted to recruit him into their war with the mysterious and ancient organization, known as the Hand.

Murdock eventually managed to find a middle ground with the Punisher while also defeating a faction of the Hand's puppet leader, Nobu Yoshioka, although at the cost of losing Elektra in the process and watching Nelson and Murdock fall apart as Foggy and Page still struggled to cope with his friend's double life as the Devil of Hell's Kitchen.

After having an emotional breakdown of losing Elektra, Murdock then decided to retire from his vigilante and heroic activities, and attempted to live a normal life as professional lawyer. After months of inactivity as Daredevil, Murdock resumed the fight when the Earth was in great peril due to the arrival of extraterrestrial threats, led by the dangerous unearthly race of creatures, known as the Chitauri. As a result, he coincidentally joined forces with other the street-level heroes to reform the heroic team Defenders, once again to fight-off the descending aliens, alongside the S.H.I.E.L.D.-based heroic team known as the Avengers. With the best efforts of both parties, the Chitauri Invasion was interrupted, and the Earth was saved, thanks to it's mightiest and most fearless heroes who helped defend it.

Rise of the Hand

A few years later, the ancient organization known as the Hand made their move by using the last known samples of the resurrection substance to bring back the recently-deceased Elektra and a few more individuals, in order to serve the Hand as their new "Black Sky." In order to find more of this mysterious substance, the five "fingers" of the Hand had gathered once more in New York City and tried to catch the Iron Fist so he would open the gates for the substance. However, the Defenders had just arrived at the scene, just in time, in order to stop them from chaotically destroying the city, in the process.

In the end, Matthew manages to successfully convince Elektra, making her snap out of her Black Sky persona and come with them to get out of the collapsing ruins. Unfortunately, Elektra and the Defenders became separated, although all of them managed to escape under the collapsing structure of the building. Elektra was then revealed to have survived the underground's entombment, days later which made Matthew relieved and relaxed, knowing that his former lover was still alright. From that moment, Matthew would never take the chance of losing Elektra once more, never again.

A few years later since his last publicly-aware mission across New York, the Guardian Devil and the reformed Defenders, along with the rest of the heroic Ultimates, have come off to face the very notorious and dangerous Crime Syndicate of New York, a formerly clandestine large gang and criminal organization consisting the state of New York's deadliest and malevolent criminals, led by the Kingpin, along with several terrorist organizations whom they made dealings with, including the likes of A.I.M. and the Ten Rings. The heroes had become triumphant and victorious against the syndicate, but at the cost of many innocent lives, most notably Daredevil's ex-fiancée and love interest, Karen Page, who died at the hands of the Devil's most twisted and sadistic foe, Bullseye, as an act of saving her most special loved one from getting killed in the mercenary's last-second attempt.

Despite this loss that he had to painfully accept for the rest of his life after Karen's death, Murdock was able to be strongly motivated by Karen's last words and advice for him as Daredevil and Murdock, and although he and the Defenders weren't able to put Fisk behind bars once more, they were successful in taking down the entire foundation of the Kingpin's Criminal Empire in the very end of the war, but at cost of almost losing his life, putting him in a comatose state that lasted for almost two weeks, with his secret identity having kept secured by the help of his long-time ally that was the former notorious night nurse of Metro General Hospital, Claire Temple, while he continuously recovers at the time.

Trial of the "Accused"

A month has already passed since the now infamous Ultimate War came to a victorious but still tragic end, Matt has physically recovered from his injuries, only to realize that he was scarred for what he went through since then, with his friends and allies worrying still aware that he is still far from recovering emotionally after Karen died in his own arms. Following the demise of Karen and his law firm slowly falling apart due to its inactivity, Murdock momentarily retired from his vigilante activities as Daredevil and attempted to live a normal life as a lawyer and decided to refocus his efforts of helping people through the justice system, to which he and Foggy Nelson finally got the chance to redeem their lawful reputations by the time they decided to work on new reccuring cases regarding six convincted and prosecuted individuals who claims to have been either forced or coerced to work with the Movement Alliance during Ultimate War, instead of actually working for them since the beginning.

The first three individuals became challenging but still victorious for the duo lawyers, ending their cases with successfully proving their innocence. However, the last three individuals would not be easy for Nelson and Murdock, having to reveal the names of the following three were Gregory Salinger (a convicted serial killer known by the alias of Foolkiller, Jason Macendale (a convicted pyromaniac known by the alias of Jack O'Lantern), and Aaron Davis (a convicted thief known by the alias of Prowler). Despite Nelson and Murdock's legal priority of defend them in the name to the law, Matt must investigate on his own free time (without returning to his Daredevil persona) if each of the three were truly accused falsely for willingly participating to work with the Movement, or if they were hiding something bigger than what they were told.

Enhanced Senses: Originally coming from his exposure to a radioactive isotope, Murdock didn't know how to handle his powers until he met Stick, who became Matt's mentor and taught him to control and enhance them. As a result, he possesses superhuman senses, agility, reflexes, balance, and etc. Murdock's nervous system has also increase some of his abilities at peak human level. Nick Fury's intel classified him as power level 7.

Retrieved from "https://marvelcomicsfanon.fandom.com/wiki/Matthew_Murdock_(Earth-61615)?oldid=239210"
Community content is available under CC-BY-SA unless otherwise noted.