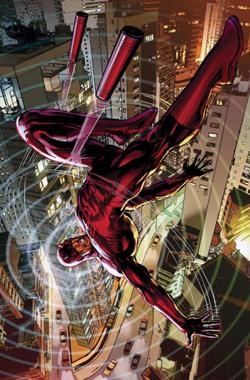 Blindness is not a weakness

Matt Murdock was born to Jack and Maggie Murdock, as a small baby Matts mother died. Jack was a famous boxer and the two would travel the world, when at school Matt would be bullied for being a “Dork” Matt secretly trained in his Father agym taking out his anger on a punching bag.

One day, Matt saw a blind man walking towards an oncoming truck. Matt pushed the man out of the way. The truck crashed and a radioactive isotope spilled out, striking Matt across the face and blinding him. While recovering in the hospital, Matt discovered his hearing, smell, taste, and touch were amplified to superhuman degrees. He also developed a "radar sense" that formed a mental picture of his surroundings.

Matts father Jack was told to take a dive in a match and he would be paid top notch by the mafia. During the match Jack crossed eyes with the mafia boss who told him to take a dive then with his now blind son who smiled at him. Jack won the match so he could impress his son, while they were leaving the arena Jack and Matt were cornered in a alleyway where the mafia boss beat up Jack. The mafia called his bodyguard Crusher Creel who absorbed a brick wall and punched Jack through his heart before Creel could kill Jack he was knocked out by the man who was saved by Matt.

Radar Sense Disruption: Though uncommon-- in unique situations (where multiple objects, sounds, temperatures, and smells, are in close proximity) Daredevil's Radar has been known to fail leaving him to rely on his other senses.

Equipment: Daredevil has used four costumes in the course of his career as a crimefighter: his original yellow-and-black costume, his modern red costume, a black-and-red armored costume that was used temporarily, and a newer black-and-red costume which was used during the Shadowland saga. When Murdock experienced a psychological break, each of his first three costumes came to be focuses for three distinct separate, distinct personalities within Murdock. Since that time, Murdock has resolved his psychological problems, and now exclusively uses the red costume. The horns on his costume are antennae that can pick up radiowaves, allowing them to serve as a police scanner. While possessed by The Beast the horns on his costume were transformed into larger devil horns when it fully awakened, and were reverted back to normal when The Beast was removed from Matt Murdock's body.
Transportation: Daredevil usually travels by foot across city rooftops through the art of parkour (the art of movement), and by the grappling hook and cable in his billy club.
Weapons: Matt currently wields a multi-purpose cane that has many different modes. Its initial form is two short sticks held together by an extendable cable. It can be configured into a nunchaku- like weapon to a manrikigusari(a long rope/chain weapon with two weights on its ends), dual short sticks which can be wielded in a pair, staff, or a cable with a grappling hook. The weapon can also be adjusted to combine both sticks into a larger stick. The weapon is held by a holster on the side of Matt's left leg.

Retrieved from "https://marvelcomicsfanon.fandom.com/wiki/Matthew_Murdock_(Earth-3220)?oldid=200463"
Community content is available under CC-BY-SA unless otherwise noted.